What Putin said Belyaninov after the “show” with searches?

As stated by the former head of the FCS, he was going to leave the post, but could not “throw the President” because he “was a big responsibility” in front of him. 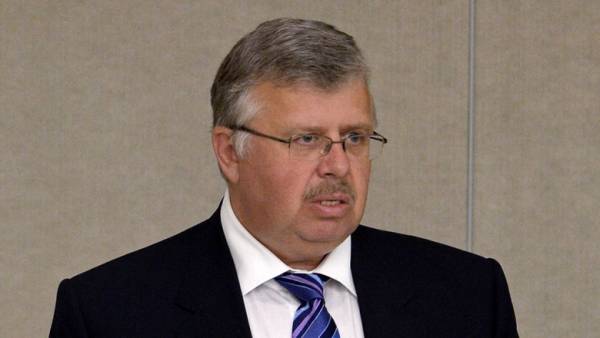 The former head of the customs service Andrei Belyaninov, the searches which the President of Russia Vladimir Putin has described as “the show” (the public showed the money in the boxes from under the Shoe) for the first time revealed some details about what happened to him.

Now Andrei Belyaninov holds the post of Chairman of the Board of the Eurasian development Bank. In an interview with RBC he said that the next day after a memorable raids on his office and the apartment met with Vladimir Putin, who asked him to resign.

“The next day after the search — said Belyaninov on the question of the date of the meeting with Putin. — He offered me to resign, says: how long you been asked for, this situation.”

According to the former head of the FCS, it did not surprise to him. “I was ready to go the day before yesterday, that is, I place is not kept, but leave it could not, because I had a big responsibility to my President,” he said.

As said Belyaninov seized during the search, the money was returned to him. To the question about the reasons for the wave of criminal cases of smuggling through the ports of St. Petersburg in the 2016-2017 year, Belyaninov did not respond. “I now have other problems,” he said.

26 July 2016 field investigators of FSB have spent searches in an office office Belyaninov in his apartment, and his two deputies. Investigative actions were held in the framework of the criminal case about contraband alcohol, the main defendant was the St. Petersburg billionaire Dmitry Mikhalchenko.

On the day of the search, the media got the photos, which shows that Belyaninov kept in his house ancient paintings and large sums of money. And the bills were stacked in boxes from-under footwear. The investigators found approximately 10 million roubles, 400 thousand dollars and 300 thousand euros in cash.