LONDON, 16 Feb — RIA Novosti. Cat Larry from the office of the Prime Minister of great Britain Theresa may on Friday once again got into a fight with a cat of foreign Minister Palmerston users of Twitter called Friday’s stage “metaphor Brexit”, the photo lying on the ground collar Larry “sold” in social networks more than four thousand times. 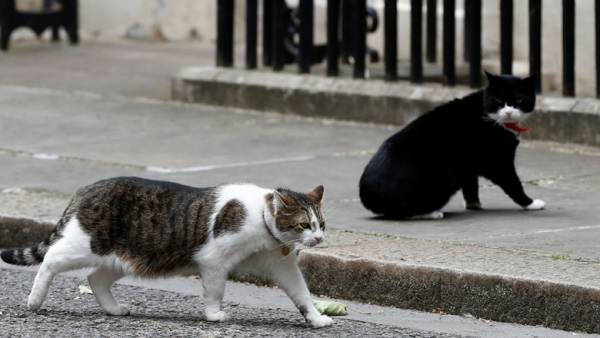 Cat Larry is considered the “chief Mouser” the residence of the Prime Ministers of great Britain and lived there for seven years, while catches no mice. With Palmerston, who regularly catches mice, Larry is fighting constantly. Witness the fights are usually the local journalists admitted to duty near the office of the British Prime Minister. These journalists usually post cat pictures on the Internet.

Friday’s pictures was published by the journalist of the TV channel ITV Nick Dixon. “Drama at Downing street this morning — the cat Larry the head-on collision with Palmerston from the foreign office”, signed photograph of standing nose-to-nose cats Dixton.

Drama at Downing Street this morning – Larry the cat has a face off with Palmerston from the Foreign Office. Fur and collar ripped off in the cat fight. @GMB pic.twitter.com/xGWUwZwlmO

Later, it became clear that Larry the battle was lost, the collar lying on the ground in shreds of wool, and Dixon is also photographed.

Larry came to Downing street in February 2011, when the family of David Cameron took his four-month-old kitten from a shelter. He became the first cat at Downing street for 14 years — the predecessor of Larry the cat Humphrey went “retired” in 1997, shortly after moving there, Tony Blair. Larry has a private Twitter account, with 166 thousand subscribers, Palmerston fans less 61.9 thousand.