MOSCOW, 15 Feb — RIA Novosti. The ALMA telescope has obtained the first ever images of the accretion disk of a black hole “doughnut” of superheated gas and matter that revolves around her and she gradually absorbs, according to a paper published in the Astrophysical Journal Letters. 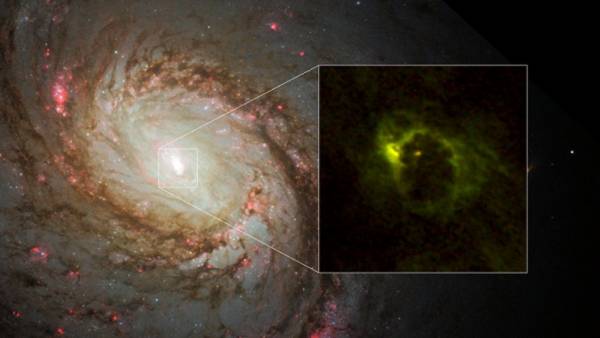 “Explaining various features of the quasars, we have long believed that the active supermassive black holes are surrounded by a structure of gas and dust similar to a bagel. To see him we could not, as it has a very small size. Only through ultra-high resolution of ALMA, we have managed to realize this dream and confirm that it exists,” says Masatoshi, Imanishi from the National astronomical Observatory of Japan in Tokyo.

Supermassive black holes exist in the center of almost every galaxy. Unlike black holes, resulting from the collapse of stars, their mass several million times more solar. They occasionally swallow stars, other celestial bodies and gas and emit a portion of the captured matter in the form of jets beams of heated plasma moving at relativistic speeds.

These emissions, like today, say the astronomers, are the result of the fact that black holes are not capable of absorbing matter in unlimited quantities. There is a limit that astrophysics is called the Eddington limit, at which the matter starts to accumulate in the vicinity of the black hole in the form of a hot “doughnut” made of matter, accretion disk, where matter particles RUB against each other, are heated to ultrahigh temperatures and emitted a black hole in space.

Not all black holes, as explained, Imanishi behave in this way — for example, the object in the center of our galaxy, Sgr A*, modest appetites and tempers, and does not have jets and accretion disk. How it is formed and why some black holes rapidly lose their appetite or on the contrary, gaining it, is today one of the main questions in astronomy.