WASHINGTON — RIA Novosti. The official representative of US state Department Heather Nauert said that Washington supports freedom of speech, any country, according to her may rename streets in the cities as it wants. 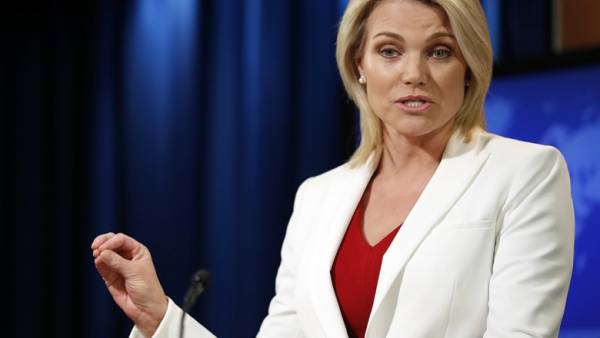 “We heard about it, we also heard about what the Russian people think about how to do the same. This is a domestic issue. If the city decides that he wants to rename the street… we support freedom of speech, they can call it whatever you like,” said she, answering the question of what Turkey wants to rename the street, which houses the U.S. Embassy.

Earlier, the head of the Duma Committee on physical culture, sport, tourism and youth Affairs Mikhail Degtyarev sent to the mayor of Moscow the letter with a proposal to name unnamed vnutrizonovye journey to the House of Narkomfin “American gridlock” and assign the old Embassy building postal address: North American impasse, house number 1. Now the Embassy is situated at Bolshoy devyatinskiy pereulok, 8.

The offer the head of the Duma Committee expressed after the renaming of Washington square, which houses the Russian Embassy, in the area of Boris Nemtsov. According to local authorities, this step “symbolizes the commitment of the city democracy.”

On Monday the Moscow mayor’s office has notified Degtyareva that his initiative will be considered at the next meeting of the working group the City interdepartmental Commission on naming territorial units, streets, subway stations, organizations and other Moscow facilities. The meeting will take place in February of this year.