Muse of the carnival in Rio will be the first British

Briton Samantha Flores — the first foreigner to be awarded the honor to sing a major role at the carnival in Rio de Janeiro.

Samantha was born and raised in London. But, according to her, she was always sure that one will leave his native town forever. In London in inclement weather it felt like a “real wuss”.

12 years ago, Samantha worked in the PR Agency in the West of the British capital and could not imagine that someday will look like this: clad in a bikini of 12 thousand small stones in the headdress of 500 pheasant feathers.

In General, she could not imagine herself like Jemail, the goddess of the sea in Yoruba mythology, whose cult is widely spread among the black population of Latin America.

Samantha chose the role of a Muse one of the schools of Samba Imperio da Tijuca in Rio de Janeiro. Now she will lead a procession of the school during the festival in the Sambódromo — the street in Rio de Janeiro, where traditionally held the Brazilian carnival and other large scale events.

As the Muse of the Samba school it will appear in the Sambódromo under the welcome of thousands of spectators in the stands. His dance she will need to set the tone for the 80-minute show — and maintain this tone throughout the carnival.

For a foreigner to sing a major role at the carnival in Rio de Janeiro is a great achievement.

Brazilians are proud of their carnival and present the performance of the Samba is very demanding. Right to dance in this genre is a difficult task even for local dancers.

Many residents of Rio de Janeiro learn to dance the Samba since childhood, bringing the grace of movement to amazing ease. 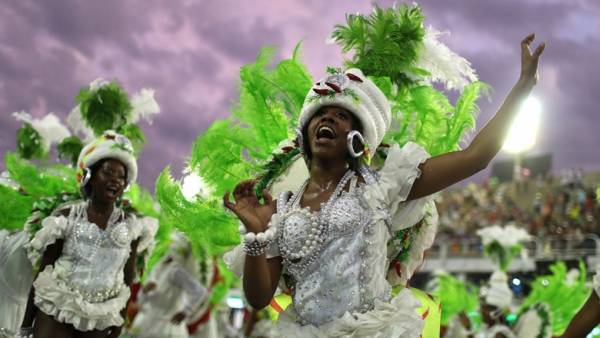 Samantha Flores and now worried, when he tells how he assumed the role of Muse school Imperio da Tijuca last year.

Like you’re a pop star, and you greet 90 thousand fans. Of course, not your person, and your Samba school, but the feelings it evokes is extraordinary.Samantha Flores

Samantha says that he grew up in North London and was “a good Jewish girl.” But in 2006 she left London’s Kentish town and went on vacation in Rio.