The Japanese foreign Ministry: it is necessary to carry out the denuclearization of North Korea, not yielding to its “diplomacy of smiles»

TOKYO, February 11. /TASS./ Japan, the US and South Korea should cooperate with a view to implementing the denuclearization of the Korean Peninsula and not to be too much influenced by “diplomacy of smiles” by the DPRK. 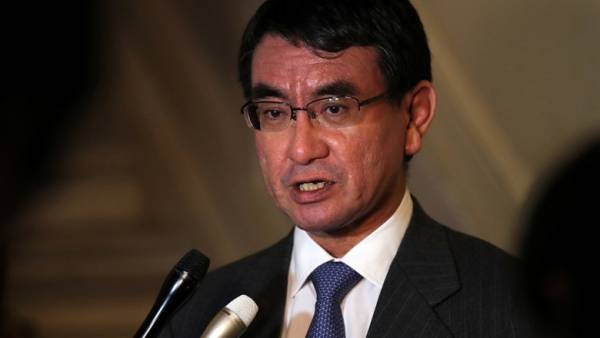 As reported by the Agency Kyodo, stated on Sunday, Japanese foreign Minister Taro Kono, who is on a visit to Brunei.

“I would like to work closely [with Washington and Seoul] for the realization of the ultimate goal of denuclearization of the Korean Peninsula. This is not to be blinded by the “diplomacy of smiles” in the performance of the North,” he said. Speaking on the anti DPRK military parade the day before the opening of the winter Olympic games in Pyeongchang, Kono stressed that, in his opinion, it speaks to the clear intention of the North to continue to develop missile and nuclear program.

Last Saturday, the President of South Korea moon Jae-In held a meeting in Seoul with President of the Presidium of the Supreme people’s Assembly (Parliament) Kim Yong Nam and the sister of the country’s leader, Kim Jong-UN — Kim-Jeong. Its key moment was the transfer letter and oral message from Kim Jong UN, in which he invited the head of South Korea to visit Pyongyang with the aim of holding a bilateral summit in the shortest possible time. Moon Jae-In, according to his administration, in response to the invitation, said that his visit to the capital of the DPRK is possible when the necessary conditions are created.