The plot on the Black river. Was Pushkin a victim of the tsarist regime?

February 8, 1837 held a duel between Pushkin and d’anthes. 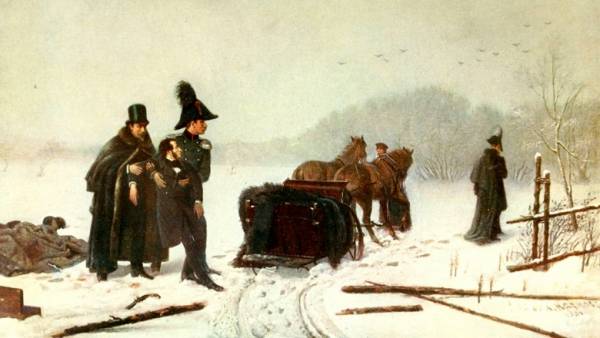 8 February (new style), 1837, on the outskirts of St. Petersburg, near the Black river near the commandant’s cottage, occurred the duel between Alexander Pushkin and Georges d’anthes. Both participants of the duel were wounded. However, the wound Dantes was easy. The injury sustained by Pushkin, was for the time fatal. Two days later the poet did not.

Death of a poet

A few days later in St. Petersburg at odds with the poem by Mikhail Lermontov “death of a poet”, causing society grave scandal. Mikhail threw charges in the death of Pushkin not only to high society, but also the Emperor himself. Nicholas I was furious, sending to the author the doctor ordered “to visit this gentleman and make sure I don’t do it”. Having received the report that she is healthy, the king sent a daring officer in the Caucasus, in the Nizhny Novgorod Dragoon regiment.

Punishment Lermontov, enhanced version that Alexander Pushkin was the victim of a conspiracy, which was involved in the powerful.

In the Soviet period, when Pushkin was already officially recognized as “our everything” and “the sun of Russian poetry”, the view that the poet and freethinker dealt power, became generally accepted. To doubt him was allowed only to a narrow circle of scholars.

But was there really a poet persecuted by the authorities? And whether it is relevant to his death?

The first problems with the authorities

Scion of a noble family Pushkin, Alexander was sent to study at the Imperial Tsarskoye Selo Lyceum. It is a privileged school intended for the education of the new generation of state officials of the highest rank. So the starting position of Pushkin promised him a bright future.

However, since high school, it became clear that the talent of Alexander is far from everything connected with public administration. However, after high school he becomes an official of the Ministry of foreign Affairs.

And soon he really starts trouble. Caustic epigrams on dignitaries and clergy brought Pushkin to the meeting with the military Governor of Petersburg, Miloradovich by: the hero of the war of 1812, who dies from a bullet of the Decembrists.

Miloradovich popular explains to him, that his antics are entitled exile to Siberia or even imprisonment in a monastery on Solovki.

But Pushkin had a lot of influential friends, who in the best traditions of Russian corruption contract with whom it is necessary, and the poet finished with a reassignment of the capital to Chisinau.

“Today I talked with the smartest man in Russia»

In 1824 Pushkin new problem: when checking his correspondence reveals a recognition of the fact that the poet was fond of “atheistic doctrines”. In those days it was a serious transgression, and Pushkin was dismissed from the service, and then exiled. However, in a private estate.

From exile, he returned in 1826 and goes straight on the “carpet” to the Emperor. This meeting is key in the further biography of the poet.

Nicholas I, aware not only of free-thinking Pushkin, but his friendship with many members of the Decembrist uprising, asks directly: what would a poet, if he were in that day in St. Petersburg?

“Stand in the ranks of the insurgents,” the honest answers Pushkin. The Emperor, who himself is not inclined to diplomacy, such directness impressed. After a two-hour conversation, he said that will be the personal censor of the poet, as close says: “I now talked with the smartest man in Russia”.

After that meeting the Emperor several times their power closes case on new questionable (from the point of view of the censors) works. Pushkin was indeed allowed a little more than others.

“History of Pugachev”: as Pushkin legalized, who was ordered to forget

In 1831, Pushkin entered the civil service as a historian and declares his intention to write a “History of Peter I”. The Emperor approves of the idea and represents the poet access to the most closed to historical archives.

The first results of the activities of Pushkin are not quite what was probably expecting the Emperor: at the end of 1833, Nicholas I was presented “the History of Pugachev,” the work on the peasant war of 1773-1775 years. This is a pretty bold move, considering that Catherine the Great, grandmother of Nicholas I, tried to erase any memory of Pugachev.

But the Emperor, after reviewing the work, making only one amendment, changing the name from “the history of Pugachev” to “the History of the Pugachev rebellion”. The book is published “at government expense”, but the special success has not. Part of the public does not perceive Pushkin as a historian, others think it’s “inappropriate”, despite the fact that it received the highest approval.

Pushkin a lot of his works do not pass censorship, but it’s enough for them to earn. In fact, Alexander Sergeevich — the first Russian writer, for whom this activity is a source of income. Disgraced poet deriving income from publications. Somehow does not fit with one another.

Perhaps for the uninitiated it will be a surprise, but in the early 1830s, years of liberal circles from Pushkin recoiled. In 1831 he wrote an ode “to the Slanderers of Russia”, which essentially supported the suppression of another uprising in Poland and gave a sharp rebuke unhappy about this European “human rights”.

Those Pushkin’s lines and today it is possible to address even the EU, though the US, though the International Olympic Committee:

Or we argue with Europe’s new?
Ile Russian victories weaned from?
Or a little of us? Or from Perm to Tauris,
From frigid Finnish rock to fiery Colchis,
From the shock of the Kremlin
To the walls motionless China,
Steel stubble gleaming,
Will not rise the Russian land?..
So send us well, opment,
His embittered sons:
There is a place named in the fields of Russia,
Among them alien coffins.

What is really there opal: in this case, Alexander acts as a powerful “voice of authority”. Then there is the TV, that he uttered would be in the air: “Coincidence? I think not.”

Problems do at this point is far from the policy issues. He earns good money as a writer, has a huge salary as historiographer of the Emperor, but gets into very large debts.

The time of death, the poet owed the amount which, according to some estimates, in the modern equivalent of $ 6 million.

The reason for this debt was the name of Natalia Nikolaevna Goncharova. The wife, who gave birth to Pushkin’s four children, was, as they say, “socialite”, one of the first beauties of the court society. But this society had to meet here and worked Pushkin tirelessly: luxurious apartment with appropriate furnishings, a carriage similar to the present foreign car premium, an infinite number of outfits and so on.

Pushkin himself from all this pleasure is not experienced. He was a very ambitious and temperamental, and to be in the shadow of his wife, he was unpleasant. And then there’s Junior court title of gentleman of the bedchamber assigned to Pushkin: the poet considered it humiliating for myself. Is the title of many of his friends in high school were received immediately after the release. But Pushkin is served intermittently, was in exile, so the Emperor more rank to assign him could not.

In the last year of Pushkin’s life, in addition to debt, are worried about the rumors around the couple. About passionate love Georges Dantes is well known, but it was Pushkin’s claim to the Emperor!

At the court in the corners whispering: grace to the poet by the king because it is the relationship with Natalia Goncharova.

And could it be really? In theory, Yes. Many high-ranking officials perceived that their spouses are in bed with the first person, with understanding. Usually, this only contributed to their career.

But Pushkin is not going the way to build a career. And about the dirty rumors was talking to the Emperor himself, who probably at this moment was not myself: the temperament of his great-grandfather, Abram Hannibal was given to the poet in full.

However, to settle scores with a jealous husband, Nicholas I would not be with hands. Easier to abandon a mistress, than his Imperial person to do a party of vaudeville.

Georges d’anthes been easier. Romantic love of the French in Natalia Goncharova secular society liked. And when Pushkin sent his first challenge to a duel in the autumn of 1836, that the subsequent marriage of Dantes to the sister of Natalia Catherine considered an act of self-sacrifice in order to protect the beloved one.

“At the Academy of Sciences meets Prince Dundukov»

But why Pushkin is so disliked at court? Certainly not for his free-thinking. Alexander anyone not adjusted, fools are not tolerated, and the epigram could simply “spread”.

Prince Mikhail Dondukov-Korsakov, was responsible for the censorship and prideratsya to the works of Pushkin, even after their approval, once received in full. Quick career Dondukov explained by the fact that at the time he became the lover of the Minister of education, count Uvarov. So Pushkin developed this theme in epigram 1835:

The Academy of Sciences
Meets Prince Dundukov.
Say, not befitting
Dundukov this honor;
Why is he sitting?
Because there is an ass.