Homeopathic remedy flu got the award of Ministry of education

“Award” given for the pseudo-scientific project.

Producing “Anaferon” (a drug for the treatment of SARS and influenza) pharmaceutical company “Materia Medica holding” received negative award from the Ministry of education and science, according to RBC. In the description of the nominations indicated that the award be given for “the most harmful pseudo-scientific project.” Among other products of this company — “Impaza”, “Alferon”, “TenTen”, “Climaxed”. 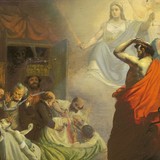 The bitter truth about homeopathy

The presentation took place in the framework of the annual all-Russian award “For devotion to science”. The details of the decisions of the jury are not given. According to “Interfax”, the representatives of the organization at the ceremony was not present. The selection of the winner in a nomination “the Award”, said Vademecum, assess the severity of false information, social risk (the vulnerable segments of the population), the threat of pseudoscientific influence on government decisions, the danger to science and education in Russia, potential for corruption, the giving on behalf of or with the support of the state, and the magnitude of lighting and informational promotion of the project.

Only the prize was awarded in 11 categories. The best popular science project of the year was the forum of “Scientists against the myths”, the winner in the category “Best online project” recognized the portal Gauge. In the nomination “the Best project in social networks” won “just Chemistry”, the best TV program called “Miracle of technology” on NTV.