As in schools, raise teachers ‘ salaries and why it only decreases. Find Out Natalia Nechleba. 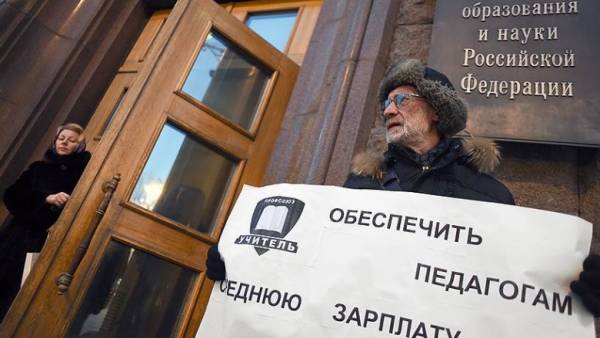 This year the salary of workers of budgetary sphere — doctors, scientists, teachers — must finally reach the sizes indicated in the may decrees of the President in 2012. And especially revealing is a school teacher. If the wages of the rest must be equal to two average on the region, the earnings of teachers five years ago, you had to hold on to one medium and keep at the same level. What really got the teachers, tried out the “Light”.

— In the last two years we stopped paying partially and then completely, about 30 percent of our wage — say in his video address to the President of the teachers of the school of the village Zverinogolovskoe Kurgan region.— Our financial situation has deteriorated. We have appealed to all authorities local and regional level. But nothing has changed.

Mr Kochetov — teacher of first category with work experience of 25 years. He teaches history and law in Zverinogolovskoe school. twice Hero of the Soviet Union Grigory Kravchenko. At a load of 25 hours per week (the norm of 18 hours) his salary is 14 thousand 700 rubles.

Two years ago I had a salary 22-25 thousand, — says Vladimir, — 2012-2013, we were paid well, but with 2014 less and less. To cancel any additional payments. We have a district is not gasified. Before we fully paid utilities. Some firewood a year, you need 40 thousand. And now it’s canceled. How can we live? So we decided on an extreme measure — a strike.

I teach law, and how can I tell children about their rights if they can’t protect their own?Mr Kozheurov

With the rebellious teachers of zverinogolovsky school first met now ex-head of the Department of education and science of the Kurgan region Natalia Babkova. She offered to check how the leader of the “rebels”, Mr Kozheurov, gives lessons. And said that with the execution of the may decrees in the region in the order of teachers ‘ salaries equal to the average for the region. Yes, that and Rosstat confirms Kurgan region teachers receive 22 388 rubles. “Of course, — said the teacher zverinogolovskoe the right school — one eats cabbage, the other meat. On average, it turns out that all eat stuffed cabbage.”

The head teacher, recorded on the bet teacher receives 40 thousand teacher — 14 thousand. In the middle and it turns out the number that is needed.Vladimir Chocolatecity right

I must say, the figure really works, and not only in the Kurgan region. In the whole country for last year in reports is very cheerful statistics in virtually all the regions average salary of teachers at the required level, and some higher: 41 thousand (Komi Republic), 26 thousand (Belgorod oblast), 33 (Irkutsk oblast), 72 thousand (Moscow). And how can you understand who is right: the striking of zverinogolovskoe the school or officials of the specialized agencies? Try to understand.

Let’s start with the fact that the law on education school financed by the region and municipality. There are schools that are contained exclusively in the region and has a municipal financed by the municipality and the region. This means that no General nationwide figures of a payment to the school does not exist. There is a concept — the ratio per pupil (how much the school receives per pupil per year). This standard includes all the purchase of school equipment, repairs, utilities and salaries of teachers… Standard for each region determines the regional Duma, depending on the financial possibilities. So in Moscow, for example, according to the interregional trade Union of workers of education “Teacher”, this standard — 160 thousand roubles a year for high school students, in the Khabarovsk region — 26 671 rubles, and in the Altai region (according to the press service of the regional Ministry of education) — 1 thousand rubles.

Ten years ago, schools began to introduce new system of remuneration. Now it is finally implemented across the country. Now what is the salary of a teacher? It is full of tragedy an equation with many variables. Before the teacher had a steady salary plus what he earns in additional lessons. Indeed, it was clear how much the average Russian earns a teacher. Now otherwise: teachers get long design sheets with lots of rows, fixing the contribution (both successful and not) in the learning process: “for the timely execution of the documentary work — 52 of the ruble,” “for holding Patriotic events — 500 rubles”… These positions can be from 5 to 20. Each region, district and school create its own payment scheme.

Of those who came to school the money part of it goes to payroll. What a piece — 50, 60, 80 percent — depends on the cost of hours of teaching, which is determined by the regional government. In a simplified scheme, the salary of teachers now consists of three main items: the base part, compensatory payments and stimulating. The basic part is paid for hours of work in class. How many hours did — and got so much. According to the Labour code the teacher should work a maximum of 36 hours per week: 18 hours he gives lessons and 18 hours — extracurricular activities — checking of notebooks, preparation of checklists, work programs, etc. In the Samara region the hours of work of the teacher in the class is worth 100 rubles, the Altai territory — 76 roubles, in Moscow — 500 rubles. In many schools teachers receive for the same lesson different amount of money based on how much the class of children.

Payment of extracurricular activity divided in two. The teacher performs a variety of duties. He may be the class teacher, system administrator, fire safety officer, assistant warden, to produce the school newspaper… For this assumed compensation payments. Depending on the region it can be 10-30 percent of the salary.

And the interesting part is incentive payments. They are paid extra for their active work with children. Then teachers get their points and money for them. “These incentive payments little understood, says Mr Kochetov — we have them all the time different money came to the school from the regional budget. 100 thousand come, then 200, then 400. Therefore, the value 1 points to every time. The newspaper students drew — 5 points received, prepared the event, the concert for the holiday, for example, 3 more points in the Olympics won more, plus 3 points. The cost score 200-500 rubles. This could coming up to 5-10 thousand. But now we have incentive payments for two years receive.” How much is the score and what he paid is decided by the school. Accrues these points the school management at its sole discretion. However the stimulating points was a significant increase in teachers ‘ salary has reached 30-40 percent. But! These payments are not a guaranteed part of the salary. The employment contract usually stipulates that they will be awarded when a teacher certain conditions. Thus these terms are described so vaguely that, if money for the school, they can not pay. “Incentive payments are directly dependent on has the funds or not,” — says Irina Abankina, Director of the education development Institute, Higher school of Economics.

Now in some regions, according to onf, incentive payments cancelled, and reducing regulations per pupil and reduced compensation payments. For example, in the Perm region of January 2017, the norm of per capita financing of schools declined by 6.4 percent. In the Stavropol region the decline in standards has led to reduced incentive payments. In the Astrakhan region, salaries were also reduced due to the reduction of incentive payments.

— Since 2013 we have wages declined by 20 percent, says Eugene sharygina, a teacher from the town of Biisk Altai territory, — abolished the fee for checking notebooks, for the conduct of laboratory and practical work of high complexity for the priority disciplines, for superintendence of classrooms, the extra charge for length changed from 10% load to 1000 in a month, cancelled the multiplying factor for the confirmation of qualification category…

Payslips of teachers in the Altai region look particularly picturesque. There is the cost of an hour of teaching one of the lowest in the country. Young teacher 18 hours of lessons per week receives about 3 thousand rubles per month. For example, what is the salary of a teacher of the highest category of the city of Biysk with experience of 18 years, which operates on two rates.