“Alligator” coincided with a military flavor

The defense Ministry is ready to buy more than a hundred combat helicopters Ka-52
Yesterday, Deputy defense Minister Yuri Borisov said that the state armaments program (GPV) 2018-2027 years includes the purchase of 114 combat helicopters Ka-52 “alligator”. The contract, whose cost may reach 100 billion rubles, will be one of the largest of the holding “Helicopters of Russia” will allow to load capacities of factory “Progress” until 2027. 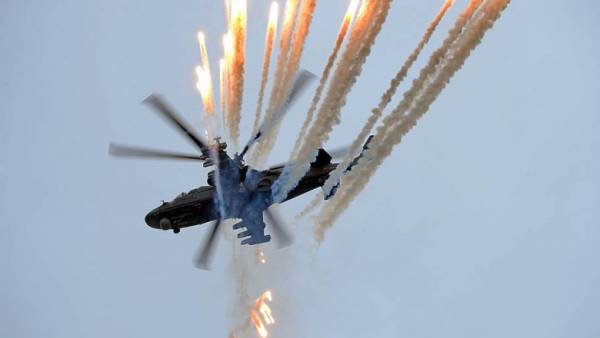 That the defense Ministry will continue the purchase of helicopters Ka-52, the Deputy Minister for armaments Yuri Borisov said during a visit to aircraft factory “Progress” (Arseniev, Primorsky Krai). “We summed up results for 2017, discussed plans for the next ten years. We have to sign a new contract for 114 combat helicopters,” — said the Deputy Minister adding that the contract will be signed in the LG 2027. According to Mr. Borisov, we will focus on the new modifications, therefore, in the event the parties discussed the details, and how the designers have time to make all the necessary improvements. In particular, according to him, the Ka-52 created a new missile with enhanced range, in addition, it will benefit from improved opto-electronic sighting system.

The first production contract military and the holding company “Helicopters of Russia” signed in 2011. By its terms, the troops in the period up to 2020 should be transferred to 146 cars worth over 120 billion rubles This contract was considered to be one of the biggest for aviation industry: in fact, it accounted for a tenth of all scheduled deliveries of helicopters of a different type. And unlike other industries, which the military has traditionally been claimed (these include shipbuilding and aerospace industry), namely to the execution of orders “Helicopters of Russia” and factory “Progress”, in particular, had the least complaints. Arsenyev, the company was able not only to promptly put the Ka-52 to the troops, but even to surpass the plan (in 2016 videoconferencing has not only received 14 provision of machines, but also two — over plan). Such a stable order by the military, coupled with the orders of Rosoboronexport (for example, Ka-52 comes in Egypt), to ensure “Progress” almost full utilization of all existing facilities. And amid the criticism of other combat helicopters (ex-VC commander in chief Viktor Bondarev reproached Mi-28NE “failed electronics”), a Ka-52 military was welcomed. In real combat conditions it was tested in March 2016, when the decision of the General staff, he was included in the composition of the mixed air group VC Russia in Syria: several machines of this type still are on combat duty.

According to the interlocutor of “Kommersant” close to the leadership of the Ministry of defense, additional purchases of the Ka-52 is due to several factors. First, the Syrian campaign has shown increased demand HQs in combat helicopters of this modification: subject to the fulfilment of the two contracts, the total number of Ka-52 by 2027 will amount to 260 cars, which will make them the primary attack helicopter of the armed forces, said the source “Kommersant”. Second, given the stagnation of the world helicopter market, “Helicopters of Russia” became increasingly difficult to look for markets abroad. “Given that we are interested in creating a naval version of Ka-52K “Katran”, the holding company had to lend a shoulder, giving the required load,” he said. The source “” in aviation industry considers that the total amount of the contract could reach about RUB 100 billion, making it one of the largest for all enterprises included in “Helicopters of Russia”. Military expert Alexei Leonov believes that the new contract with the defense Ministry means for holding “unconditional victory” because it ensures “Progress” money and a fixed price for the products.