The earthquake in Taiwan took the lives of four people, 145 were gone

BEIJING, 7 Feb — RIA Novosti. The earthquake in Taiwan that occurred on Tuesday around midnight in Hualien County, killed four people, injured 225, 145 are missing, the currently ongoing search and rescue operation, which involved more than 1,3 thousand specialists. 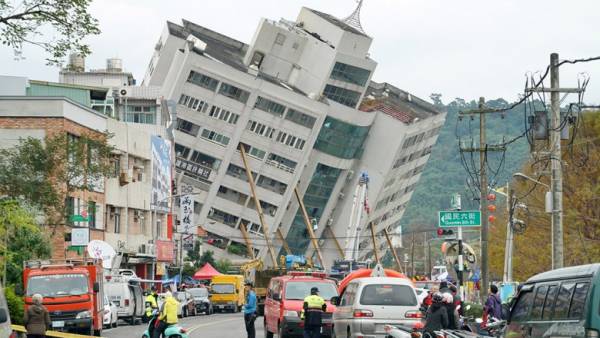 A major earthquake of magnitude 6.5 occurred on 6 February at 23.50 local time (18.50 GMT) off the coast of Hualien County in the North-East of the island. The earthquake lies at a depth of 11 kilometers.

The earthquake in different localities of Hualien County strong destructive in several large buildings, road surface cracks, more than 40 thousand households cut off from the supply, over 700 from electricity.

More than other settlements suffered Hualien city, where the destruction was subjected to three hotels, a restaurant, two residential buildings and a military hospital.

Considerable damages were received by two bridges, they are closed on Wednesday. Also blocked a few highways, including speed.

The most dangerous situation arose after the first four floors of the building of one of the hotels of the city were destroyed, causing the entire building did not collapse, but it bent 45 degrees at the moment, it is unknown how many people can be inside of it. Rescuers are trying to do everything possible to strengthen the walls of the building and prevent its final destruction until the completion of the search and rescue operation. According to reports, the building was evacuated nearly 120 people.

The government of Hualien city on Wednesday morning released a statement that schools, kindergartens and offices will remain closed, but later it was announced that educational institutions and offices can get to work and classes as usual.