Polish President will sign the law about the Holocaust

WARSAW, Feb 6 — RIA Novosti. The President of Poland Andrzej Duda said that he would sign a law providing criminal liability for propaganda of the ideology of Bandera and the charges of the Polish people involvement in the Holocaust, but then send it to the constitutional court of the country. 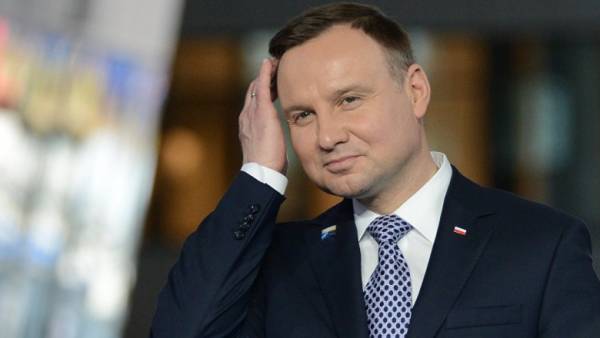 About his decision, Duda said Tuesday in a statement.

The Senate of Poland at the end of January adopted a law on criminal liability for propaganda of the ideology of Ukrainian nationalists, the denial of the Volyn massacre and alleged complicity of the Polish people to the Nazis during the Second world war. The law will take effect after it is signed by the President.

The document is at the stage of parliamentary work on the project has caused sharp negative reaction in Ukraine, in Israel, in the United States. In tel Aviv, in particular, fear that the law may strike at the Jews who have suffered at the hands of the inhabitants of Poland and want to talk about it.

Earlier the Israeli leadership, including Prime Minister, President and foreign Minister, expressed his disagreement with the Polish law and demanded him to reconsider, accusing the authors ‘ attempt at historical truth.

The Israeli memorial complex “Yad Vashem”, the world’s largest centre for the study of the history of the Holocaust and commemorate its victims, has promised to continue to investigate the “hard facts” about the attitude of poles towards Jews during the Second world war, despite the limitations imposed by Warsaw.

In turn, the Ukrainian radicals, including representatives of the banned in Russia as extremist movement “Right sector” held a picket diplomatic grounds of Poland in Ukraine. They demand from the President of the Republic not to sign the law. Representatives of nationalist party “Freedom” in response to the actions of Warsaw, registered in the city Council and other local authorities of the decision to use red-black flag “organization of Ukrainian nationalists — Ukrainian insurgent army” * along with the state.