MOSCOW, 5 Feb — RIA Novosti. Orbital Observatory “Hubble” has received photos of the galaxy NGC 1559 in the constellation Grid, one of the closest to us and most lonely galaxies in the observable Universe, reports the website of the space telescope. 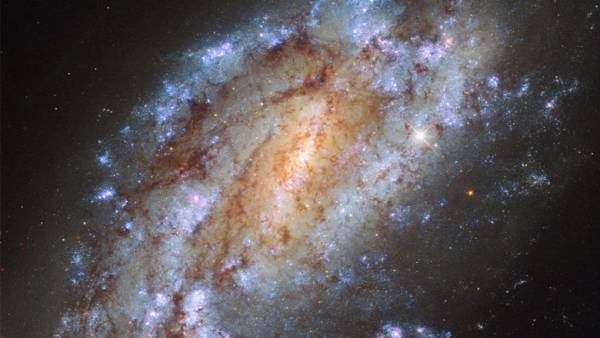 Today believe cosmologists, matter distributed in the Universe uniformly, but in a giant “web” that are associated with each other threadlike accumulations of visible and dark matter, separated by a giant space “deserts”. These voids and clusters of matter are the result of the existence of a kind of “echo” of the Big Bang, the so-called baryon acoustic oscillations, matter distribute unevenly across the rapidly expanding Universe in the first moments of her life.

Today, scientists are arguing fiercely about how much matter it contains, the network.

The fact that recent observations with Hubble have shown that the total mass of matter in the thread of this “web” and in the space between them is approximately two times less than predicted by theoretical calculations.

The question arose — where did this matter, over which scientists are fighting still.

For this reason, astronomers were greatly interested in especially galaxies that are outside this web. Observing them, the astronomers try to estimate how much matter is contained in the voids between the threads, and do it in order to explain this “universal loss”.

A striking example is the galaxy NGC 1559 in the constellation of the Grid, distant from the milky way about 50 million light-years. It is similar in its shape to our Galaxy, but NGC 1559 significantly less, giving the size and weight about 100 times.