“Stab in the back”: in Parliament criticized the Polish law on “Bandera»

In the Verkhovna Rada of Ukraine called the Senate of Poland, a law introducing criminal liability for propaganda of Ukrainian nationalism “a travesty of historical truth.” According to the co-chairs of the parliamentary group on Interparliamentary relations lie with Poland Oksana Yurynets and Mykola Knyazhytsky, the law — the “anti-step and stab in the back”. They urged the President of Poland Andrzej Duda to veto the law. 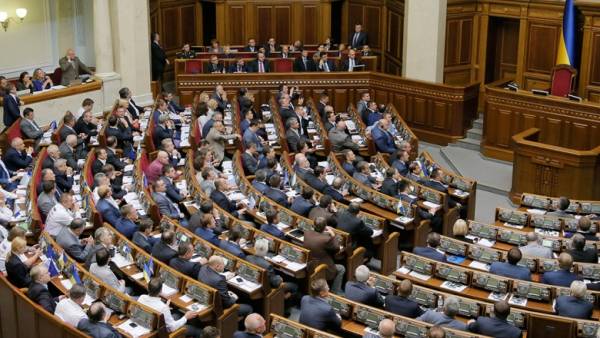 “Anti-Ukrainian radical step” and a “stab in the back” — so the co-chairs of the parliamentary group of the Verkhovna Rada of Ukraine on Interparliamentary relations with Poland Oksana Yurynets and Mykola knyazhytsky described the Polish Senate adopted the law against the ideology of Ukrainian nationalism.

According to the MPs, the approval of both chambers of the Polish Parliament of a package of amendments to the law on the Institute of national memory is nothing like a “violation of the historical truth”.

This law “can destroy the Foundation for good relations” between the Ukrainian and Polish Nations, said the Yurynets and knyazhitsky.

“The humiliation of the dignity of the Ukrainian nation, the desecration of historical truth and the denial of more than four decades of work on reconciliation between our peoples”, — reads the statement of the deputies.

According to Ukrainian parliamentarians, fresh Polish law is a “stab in the back” from a neighbor, which Ukraine “is bound by strategic partnership and mutual sympathy between millions of Ukrainians and poles”.

The MPs also indicated their rejection of the use of the term “Ukrainian nationalists” against people who committed crimes against the poles, because, according to Ukrainian MPs, the definition of nationality “is missing when specifying the crimes of the Nazis and the Communists.”

“This effectively means that.Polish Parliament calls Ukrainian people “a nation of criminals and collaborators with the Third Reich,” — said in a statement.

They also demanded from the President of Poland Andrzej Duda to impose on the veto law.

The Minister of foreign Affairs of Ukraine Pavlo Klimkin has criticized the law on criminal liability for propaganda of Bandera ideology, the negation of the Volyn massacre and allegations of complicity of poles with the Nazis during the Second world war, which took the Polish Parliament.

“The decision by the Polish Parliament does not focus on the discussion regarding historical truth, and the construction of historical mythology. Introduction to law the term “crimes of Ukrainian nationalists” tightens unilateral stereotypes and provokes a response. The idea is to recognize some of the nation criminal leads nowhere,” wrote Klimkin in his Twitter.

He also noted that Ukraine “has always advocated and will advocate for equal dialogue and strategic partnership with the Polish side”. Despite the concerns associated with this law, the Ukrainian side is ready to objective dialogue, based on facts, said Klimkin.