Mexican elections put it, “the hand of Moscow»

The theme of “Russian interference” in the elections is now beginning to develop actively and in Mexico. U.S. Secretary of state Rex Tillerson yesterday began a Latin American tour today at the meeting with his Mexican counterpart Luis Videgaray Kaso may raise the question about “hand of Moscow” in the upcoming elections of the President of this country. Anyway, about this Mr. Tillerson was asked by U.S. senators Marco Rubio and Robert Menendez. They claim that Russia is trying to affect the outcome of the vote, supporting the left candidate Andres Manuel Lopez Obrador. The politician such speculation makes fun of, calling himself “Andres Manolovici”. Respondents ‘ b ‘ experts in Russia and Mexico called the talk about the support and sponsorship of the Kremlin one of the Mexican candidates unfounded. 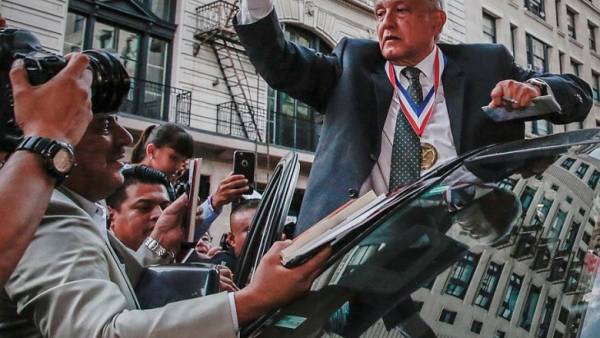 “We urge you to raise the question about the importance of a strong, independent electoral systems in Mexico and in General in Latin America”, — said in a letter to U.S. senators Marco Rubio (Republican) and Robert Menendez (Democrat) for Secretary of state Rex Tillerson. The parliamentarians claim that they are “concerned about the increasingly active attempts to” influence the electoral processes in the region.

According to them, Russia may try to intervene in the Mexican General election, scheduled for July 1, 2018. On this day, the citizens will elect the President and re-elect both houses of Parliament.

The senators argue that to achieve its objectives, the Kremlin is using “sophisticated technologies” and ask Rex Tillerson to offer to the Mexican authorities to protect elections from foreign influence, the assistance of the U.S. Agency for international development.

Although the race in Mexico has not even officially started, Russia has several times managed to blame in influencing electoral processes and the sponsorship of candidates. First some signs of “Russian intervention” was recorded by the US presidential Advisor on national security Herbert McMaster. Following him to the charges was joined by the leader of the ruling in Mexico the Institutional revolutionary party (PRI), Enrique Ochoa — he noted that the international media “documented” support of presidential candidate Andres Manuel Lopez Obrador from Russia and Venezuela.

Mr. Lopez Obrador is elected from the left party “Movement of national revival”. On accusations he responded with a humorous video, which was filmed in the Mexican port of Veracruz.

“I’m waiting for a Russian submarine, which will bring me gold from Moscow”, — explained the politician standing on the shore of the Gulf of Mexico. Also, Mr. Obrador admitted that in fact his name is “Andres Manualovych”.

But the second video was not enough to stop a series of charges.

In another video posted yesterday in Facebook, the candidate said: January 31, millions of Mexicans came reports that he’s going to deliver Mexican crude oil to Russia in exchange for help in the election campaign.

The politician called the incident “a new stage dirty war” against him and asked the national electoral Institute to investigate.

“The authorship of these fakes is clearly visible»

Such statements are primarily directed against the Mr. Obrador, but not against Russia, explained “Kommersant” a Mexican political scientist, Daniel de La Garza. “It’s part of the election strategy of the authorities aimed to exclude the possibility of the victory of Lopez Obrador,” said the expert. As follows from the results of a survey conducted by the newspaper Universal, candidate lópez Obrador can count in the first round with 32% of votes. His opponent from the coalition “Civic front for Mexico” Ricardo Anaya by 26% and the candidate of the ruling PRI, josé Antonio Meade was only 16%.

“A similar campaign strategy to discredit andrés Manuel lópez Obrador was used against him in 2006, when he first participated in the presidential elections, continues Daniel de La Garza.— Said then that his campaign is sponsoring the Venezuelan President, Hugo Chavez, although obvious evidence that existed.”

Official confirmation of the Russian intervention there is now in these charges there is no logic, assured Kommersant St. Petersburg state University Professor, Latinoamericana Victor Heifetz: “we Have trade interests in Mexico, but commercial interests do not require intervention. We trade less than it could be, but this is not due to the particular government in Mexico, it just happened. For intervention must be political reasons. But they are not”.

The expert added: “Relations with the current government of Mexico are developing well. And if the task is to change the leadership of the country, to whom? Our communication about the same and would have developed anyway»

. Respondents ‘ b ‘ experts also claim that the majority of Mexicans do not perceive statements against Russia seriously. “The question of Russian influence was raised in the circles of the liberal intelligentsia as something reasonable. Nevertheless the population of Mexico does not consider a possible Russian intervention in the elections, it rather fears that the ruling party will cheat again”, explains Professor at the National Autonomous University of Mexico Imelda ibáñez guzmán.

Russian officials, meanwhile, any interference in Mexican elections deny. The official representative of Russian foreign Ministry Maria Zakharova called the accusations “stuffing” and “fakes, the authorship of which is clearly visible”.

Apparently, someone in the countries that are close to Latin America, do not like the progressive development of Russian-Latin American relations that are a real cooperation and also the warm and friendly feelings of mutual sympathy which unite our peoples.Maria Zakharova

“Accusations against Moscow could complicate its relationship with the current President, Enrique Peña Nieto, but it won’t last long,” predicts in a conversation with “Kommersant” Professor of the University of North and South America (Puebla) the Badin Mohamed El-Attivi. We will remind, the President peña Nieto, according to Mexican law, in any case can not run for a second term. “A negative impact on the relationship with the next head of state this story will not have, adds the source “b”. On the contrary, the US President Donald trump and his aggressive policies in Latin America may contribute to the strengthening of relations between Mexico and Russia.”