Posters with the motto “Our country, our President, our choice!”will replace billboards with the campaign logo on a background of blue snowflakes. 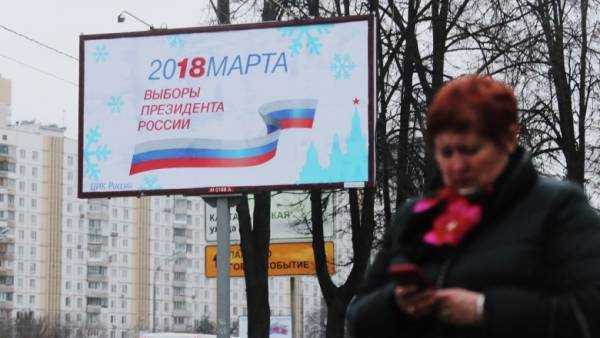 MOSCOW, January 31. /TASS./ The second phase of the outreach activities of the CEC on the eve of elections of the head of state will include the slogan “Our country, our President, our choice!”. Updated design informational posters, which will appear from February throughout the country demonstrated on Wednesday to journalists in the CEC.

“From tomorrow, we change our outer awareness,” — said the CEC Chairman, Ella Pamfilova, and then on the big screen in the atrium of the building Commission appeared saver with an appropriate motto.

“From tomorrow, the same posters will replace the snowflakes that you watched half of December and all of January,” she said.

Previously, nationwide was placed billboards with the logo of the campaign, developed under contract for the CEC PR firm “Ima-consulting” on a background of blue snowflakes.

Pamfilova also reported that prepared three waves informing about the elections, each has its own design.

CEC on the eve of elections of the President held a competition to develop the concept of outreach activities during the preparation and conduct of the vote, he won the PR-company “Ima-consulting”. As reported earlier, Pamfilova, the amount of the contract with the firm was about 37 million rubles. Promotion of content on the Internet under contract with the CEC will deal with the group of companies “Mikhailov and partners”.

Presidential elections will be held on 18 March.