The southern regions of Morocco was covered with a strong snowfall

Because of rain hampered travel on the road connecting Marrakech and Ouarzazate. The houses in remote areas is not enough firewood for heating. 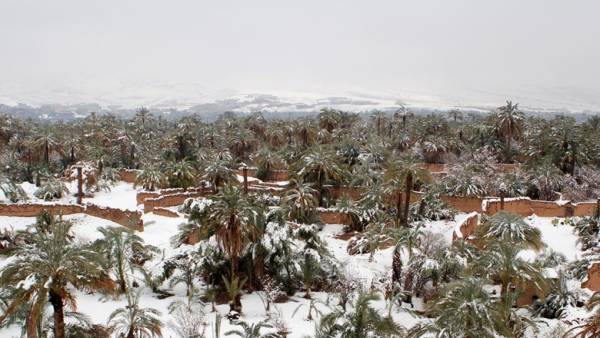 RABAT, January 31. /Corr. TASS Pervin Mamed-zade/. Heavy snowfall, accompanied by temperature decrease, took place in the past day in the East, South-East and the South of Morocco, covered with snow, desert, semi-desert areas and oases.

The residents of Ouarzazate and Taroudant — two tourist cities of the southern Kingdom saw the snow-strewn palm trees, rooftops, cars and roads. Under the snow was villas with pools, hotels, and historic monuments and attractions — the fortress de Taourirt in Ouarzazate, and a large Medina (medieval city) with its old market in Taroudant.

Snowy winter came to Zagora — a small town near the Sahara desert, near the border with Algeria.

After years of drought, southern regions of Morocco experienced heavy rains and snowfalls, which are not seen for nearly half a century.The national weather service of the Kingdom

As noted, thousands of fans riding on sleds and skiers occupied the hill station of Michlifen and Hebri.

However, due to heavy rain hampered travel on the motor road connecting Marrakech and Ouarzazate. In homes in remote areas lacking warm clothes and firewood for heating.