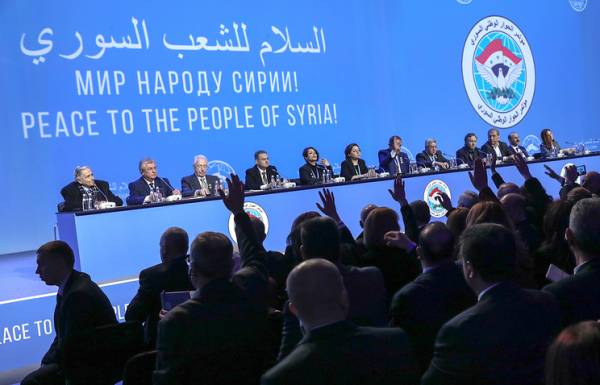 SOCHI, January 30. /TASS./ Congress of the Syrian national dialogue, in which different layers of Syrian society will begin a direct conversation about the post-war structure of the country, takes place in Sochi on Tuesday.

The public part of the Congress, which began with a two-hour delay, involved the appeal of President Vladimir Putin, which was read by the Minister of foreign Affairs Sergey Lavrov, and the election of the Congress Presidium.

The main part of the forum, the results of which 1,500 participants from Syria should form a constitutional Commission and to adopt a final Declaration on how to resolve the Syrian conflict, takes place behind closed doors.

To solve the Syrians

Opened the Congress, the elder of the forum, head of Trade Union of Syria Mohammad Hassan al-Kal. In the speech, he stressed that gathered in Sochi representatives of the Syrian people are going to “stand United to protect the sovereignty, independence and unity” against those who do not want for Syria the future.