The European court has dealt with “violent behaviour” of protesters

The new series of the decisions of the European court of human rights (ECHR) in the “Bolotnaya case” was first on the assessment of the response of the authorities to the actions of the demonstrators who used violence against police during the dispersal of sanctioned “March of millions” in Moscow on 6 may 2012. The ECHR has not recognized the responsibility of applicants in the beginning of the collision and found a violation of the European Convention by their criminal conviction not only for the attack on representative government, but also for participating in the riots. Against the doubling time one of the applicants Andrei Barabanov previously rejected by the constitutional court of the Russian Federation. The ECHR stressed that the severity of these sentences “lead to a failure of broad public participation in demonstrations and open political debate.” 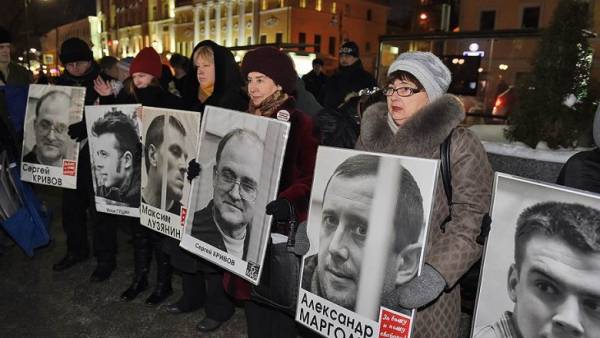 Published today in the judgments of the ECtHR assessed the sentences of the defendants in the “Bolotnaya case”, convicted of using violence against a representative of authorities (article 318 of the criminal code) and mass riots (article 212 of the criminal code) to disperse the demonstrators on Bolotnaya square in may 2012, protesting against allegedly fraudulent presidential elections.

Unlike the case Yaroslav Belousov, who, as previously noted, the ECHR, has been unfairly convicted of that “sighting thrown into the police an unspecified solid object of yellow color spherical shape” (presumably, lemon), the fact that the use of force by the claimants by the artist Andrei Barabanova and students of Stepan Zimin and Aleksey Polikhovich questioned at the trial in Strasbourg were not exposed.

Andrey Barabanov was struck in the bulletproof vest police Sergeant, breaking through the cordon (he claimed to have received blows to the head, was scared and angry); Stepan Zimin broken finger to a police officer, throwing a piece of asphalt (he denied it), and Alexey Polikhovich was struck on the hand of the policeman (trying to discourage other protesters from beating him with batons policemen).

Without assessing the validity of the charges, the ECtHR found inadequate content of the applicants in prison until the sentence comes into force and the punishment of deprivation of liberty for terms from three and a half years, awarding them a compensation of €10 thousand to €12.5 thousand

As recognized by the ECHR, applying a blow to the head and body of the police, not causing long-term damage could lead to the detention of the offender, but “over time the nature and seriousness of the offence as justifying the applicant’s detention inevitably became less relevant.”

The judges of the Russian Federation at the choice of measure did not refer to specific facts, but “relied on information obtained from secret sources” (about the relationship of the claimants with football fans and “destructive organizations”), denying claimants the possibility to challenge it.

The decisions of the ECHR States that these data have not been evaluated in an adversarial procedure, and the contents, authenticity and the very existence of the relevant investigative material is not confirmed.

Violated the Convention for the protection of human rights and “collective decision on the detention without individual assessment bases for each of Respondent”. “The government has not put forward any facts or arguments that could convince her otherwise”, the ECHR established a violation of the applicants ‘ rights to liberty and security of person.

Excessive considered in Strasbourg and demonstrators assigned to terms of imprisonment for participation in mass riots, twice under the criminal code for the strike official.

The government justified the severity of the sentence “a threat to political stability and public order”. The ECtHR found these arguments to be unjustified, noting that “does not support violent behaviour”, but believes the actions of the applicants, although associated with violence, but have not reached the degree of aggression, disproportionate sentence.

Note that the complaint of Andrei Barabanov norms of the criminal code, which allowed to assign in such cases, the punishment for “multiple offenses”, the constitutional court previously refused to consider. The ECHR, however, stressed that the severity of imposed sentences of appellants “failure leads to wider public participation in demonstrations and open political debate”, and “stunning effect” of the punishment of defendants “even more intensified large-scale coverage of the case in the media.”

Riots have been associated with the dispersal of a peaceful Assembly, stressed the ECHR, therefore, the qualification of responsibility for the outbreak of clashes — the “Central question” for the criminal prosecution of the applicants.

The ECHR found no evidence that the appellants were “among those responsible for starting the clashes between protesters and police,” noting that they could not leave the place of event and faced with a harsh police actions that national courts “have never analyzed”. Criminal prosecution and conviction for participation in mass riots in such cases the ECHR has deemed “interference with the exercise of freedom of Assembly”.

Lawyer Andrei Barabanova, Irina Khrunova, believes that “the key result of the “Bolotnaya case””, and the lawyer Stepan Zimin and Alexei Polikhovich Dmitry Agranovsky said he would seek a review of sentences.