Syrian Congress in Sochi: a dialogue without clear results

In Sochi hosted a one-day Congress of national dialogue in Syria. Moscow presented this meeting as the next stage of Russia’s efforts to restore peace in Syria and the attempt to breathe new life into the peace talks in Geneva. 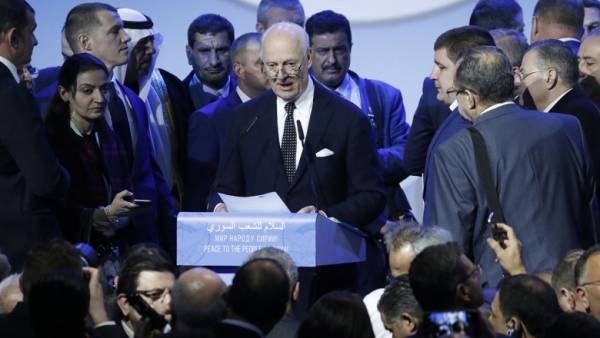 The negotiations resulted in an agreement to start the creation of a Constitutional Commission involving representatives of the Syrian government and the opposition.

The question of how closer this meeting negotiations to achieve lasting peace in Syria remains: as acknowledged by the organizers of the meeting, no time limits on the establishment of the Commission and especially the writing of the new Constitution outcome not guess.

Minibuses carrying delegates to the meeting and journalists were plastered with peace symbol — a dove on a blue background. Forces on the design of the Congress did not spare. “Glued for 40 minutes, and peel will have half a day to the body will not scratch” — grimly said the driver of one of the Mercedes cars.

Something on the move had to be redone. First, some of the buses struck a stylized image of a handshake of two hands sleeve in the form of flags. On one or two stars, with the official Syrian flag, the other three, with a banner, which stands for opposition forces.

Then for some reason the logos have altered, and the symbolism of meeting two-star one hand shakes the other. It was the occasion for scandal.

Arrived from Turkey the delegation of 80 people refused to leave the airport until the hated flags will not be removed. Physically it was impossible, and the opposition, the Syrians have departed from Sochi, reducing and without that not a very wide representation of groups opposed to the regime of Bashar al-Assad.

The representative of one of the boycotted Congress groups, the so-called negotiating Committee of the Syrian opposition (HNC), still at the planning stage of the meeting called it “negotiations of the regime with the regime”.

On the establishment of the Congress of the presidents of Russia, Turkey and Iran announced two months ago, but his organization came up against the list of delegates.

The most irreconcilable opponents of Syrian President said that the guest list is heavily weighted towards the forces loyal to the current government.

Thinking to the last weekend to boycott the Sochi meeting and said the SNC, which still remained the main representative of the Syrian opposition groups at the talks under the UN aegis in Geneva.

The organizers of the meeting is not confused. They stated that the Congress received nearly 1,400 people, and this alone should speak of the representativeness of the meeting.

The meeting was closed to the press, but, judging by the staff the start of the event, the audience was really mixed. Met national and religious headwear dozen different styles. Most delegates were dressed in secular, and not even too formal clothing.

Conspicuous significant meeting for the Arab women, in garments of various degrees of conservativeness. Stood out for the lady with the makeup and hair, which felt Hollywood scale and not the Muslim restraint.

After a two-hour delay, the meeting was opened by elder, President of the chamber of Commerce of Damascus, Hassan al Kalaa. “We announce to the world that is able to rally, know how to make our country stronger and better,” he said. Doubts on this score are so strong that to convince the skeptics among such sentences is unlikely.

Confirmation followed quickly. During the opening speech of the foreign Minister of Russia Sergey Lavrov, one of the delegates stood up and began loudly to praise Russia. In response jumped to other members and, despite the entreaties Lavrov to calm down, began to loudly protest, accusing the Russian air force in the destruction of the civilian population.