Moscow to refrain from reciprocal steps: “not going to look for trouble,” said the President. 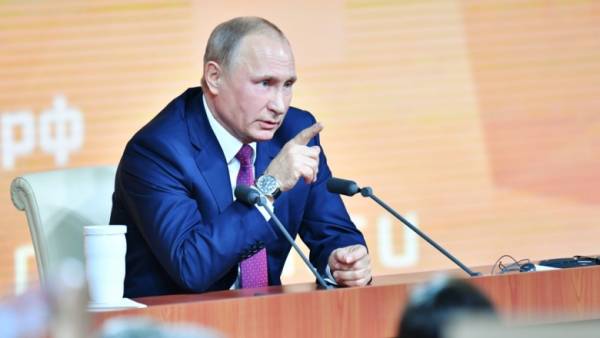 The President of Russia Vladimir Putin at a today’s meeting with his Trustees made a joke that offended by the fact that it was not included in the “Kremlin report” published by the U.S. Treasury. “It’s a shame, listen,” the President reacted to a question from Trustees about the attitude to the report. According to him, Russia will refrain from retaliatory steps Moscow will wait for developments:

We are not going to look for trouble, to aggravate the situation. We want and will patiently build relationships so, how ready the other side, the American, in this case.

Putin said that today morning he was informed about the Kremlin report, but the list he wasn’t looking. “We have to think about yourself, to deal with the economy, agriculture, export support, health, education, defense, of course — and then comes the realization that there is no sense to formulate some lists, to threaten, frighten or attempt to restrain our development… guided by the well-known rule — “the dog barks, the caravan goes on”,” — said the President.

The deterioration of relations

As for the list — the whole administration of the President, all government, all business… each of these people and for each of these structures are ordinary citizens of our country, labor groups, entire industries. That is essentially all of us, all 146 million, brought in a list. What is the meaning of such actions, I don’t understand.Vladimir Putin

But, according to Putin, the list of the Kremlin report is “definitely unfriendly act”. “It complicates an already difficult situation in which Russian-U.S. relations and harm, of course, international relations as a whole”, — said the President.

In his view, the compilers of the list are “mostly involved in their internal politics”, attacking the President of the United States. He recalled that due to problems with the budget approval by Parliament Donald trump could not even use company aircraft for a flight at the economic forum in Davos. The opposition argues with trump on many issues, including international — “referring to alleged interference in U.S. elections, spoil and fall apart completely Russian-American relations”.

The Russian President recalled that relations between Russia and the United States have something to lose — is the Iranian and North Korean direction, the start Treaty, and cooperation of secret services.