Paleontologists have discovered in the Dakhla oasis, in the Libyan desert, the remains of a dinosaur, which belonged to a previously unknown species. He was named Mansourasaurus shahinae: it was huge, the size of a bus, a sauropod that lived approximately 80 million years ago. 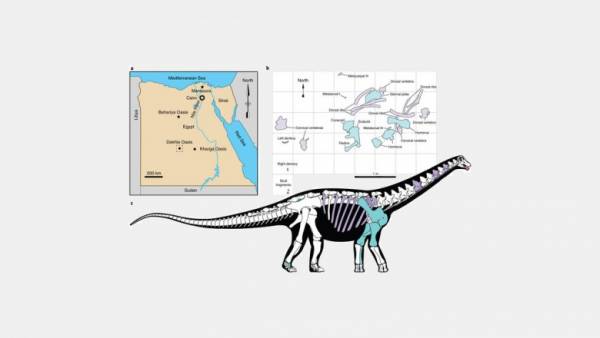 This dinosaur has helped several specialists to clarify what was the geological and evolutionary situation in the late Cretaceous era. Briefly about the study reports portal New Atlas.

Rod Mansourasaurus refers to the titanosaurs, a group of saurischian dinosaurs infotrade sauropod.

This group includes the largest animals that ever lived on Earth, in particular the biggest dinosaur — Patagotitan mayorum, discovered last summer.

Representatives of M. Shahinae was not so great: at length they reached “only” 8-10 meters, and weighed about seven tons.

The remains of a new dinosaur was found by a group of Egyptian and American paleontologists, under the leadership of Dr. Sallama Hesham (Hesham Sallam) from the University of Mansoura. Experts have discovered part of the skeleton of the ancient animal, including fragments of skull, lower jaw, neck and back vertebrae, ribs, shoulder bones of the forelimbs.

However, as noted, the discovery allows scientists to better understand how to look Africa in the era of late Cretaceous. Remains Dating from this period (roughly between 100 and 66 million years ago), discovered not so much so the experts can not accurately determine which dinosaurs inhabited the region in that period.

In that era the Earth has undergone many significant changes. Earlier all we know the continents were one giant continent, Pangaea; while in the Cretaceous period Pangaea was beginning to break up into several parts. It is not known whether North Africa is still connected with Europe, however, after analyzing the bones of M. Shahinae, experts have determined that this species was “closer” to European and Asian dinosaurs than to the African and South American.

Thus, as the researchers note, some of the last dinosaurs that lived in Africa, were not completely isolated, as was supposed earlier; in that era continued to have contacts with Europe.

The study was published in the journal Nature Ecology and Evolution.