The Russian leadership took in the sights of

The US government released “a list of friends of Putin”, the list of Russian officials and businessmen, whom Washington considered close to President of Russia. In total, the list includes 210 people, including Prime Minister Dmitry Medvedev, the head of Sberbank German Gref, Minister of transport Maxim Sokolov, the head of “Kaspersky Lab” Eugene Kaspersky and many others. Being on the list does not mean automatic imposition of sanctions. However, according to experts interviewed by Kommersant, the pressure he exerts. 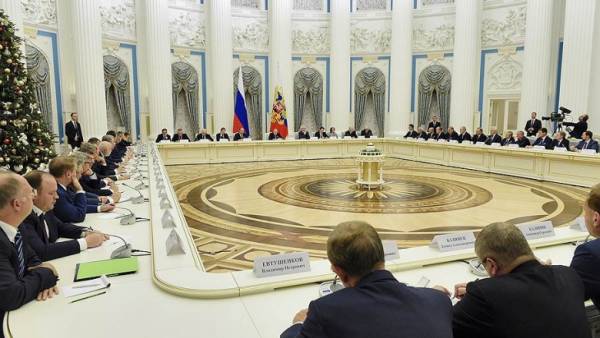 In the U.S. Treasury document States that the criterion for a hit was “close to the Russian regime and the total as” more than $1 billion At the same time, the report directly says that “it is not the sanctions list, and the inclusion of people or structures does not mean getting them under US sanctions”. Being on the list, therefore, cannot be used by any authority of the United States for any restrictions to the address listed individuals and entities. This, says the report, is set forth in separate laws.

In addition to the individuals and organizations report directly allocates a new category of “argosycasino structure”, which “originate in the Soviet planned economy”. They are defined as enterprises whose earnings in 2016 amounted to more than $2 billion and not less than 25% owned by the government.

The authors of the report inform the readers that after the collapse of the USSR the economy was largely privatized, but later “the government responded to financial turmoil, including the financial crisis of 2008 and the imposition of sanctions in 2014 to increase the share of state participation in the economy.” As a result, by 2016, “argosycasino structure gave a third of the jobs in the country and produces 70% of GDP.”

Further, the Annex to the report are lists of 210 individuals identified as close to Vladimir Putin. A list drawn up mainly according to formal criteria. It automatically includes all Russian Ministers, presidential advisers, members of the presidential administration, the presidential representatives in the Federal authorities, heads of the largest state-owned companies, as well as 96 the largest entrepreneurs selected under the “property qualification”. Persons already included in the sanctions list of the States marked with an asterisk: nearly 10% (21 of 210 people).

The political scientist, the head of “Minchenko Consulting” Evgenie Minchenko believes that the definition according to the formal criteria helped to keep energized almost the entire top management layer in Russia.

Pending the threat of a worse threat than realized, — told Kommersant the expert. — The US Treasury announced that all the “under the gun” and their actions closely watched.

Mr. Minchenko, however, expressed doubt that the publication of the report will be followed by a “rupture of relations” between Russia and the United States, as shortly before this he had said some Russian politicians.

Managing partner HEADS Consulting Alexander Bazykin notes that persons who have not previously appeared in the American sanctions list, but was included in the “Kremlin report” “there is every reason for concern.” “Although inclusion in the provisional lists on the severity of the impact in comparison with the sanctions restrictions, the overall comfort level of doing business abroad, and investments will be significantly reduced. The references in the report to imply the inclusion of a person in a group of “sanctions risk” because, if it is OFAC will not impose restrictions on them, this can happen at any moment — he says in an interview with Kommersant. — I believe the authors of the report were guided by this logic, that the inclusion in the list should exert considerable pressure on the partners, creditors and counterparties, which are referred to in the report of the person communicating, which may adversely affect their financial condition and investment opportunities and open accounts outside the Russian Federation, not only in USA but also in Europe.”

In the state Duma expected, reacted negatively to the publication of this document.

This is an obvious hostile move by the USA against the Russian Federation and its policy, — said the Deputy head of the Duma Committee on defense Andrei Krasov. — Dialogue is impossible. If Russia does not hear the monologue we do not participate.

“This is another step, which, indeed, leads to tension… — said in an interview with RIA Novosti Deputy Chairman of the Duma Committee on international Affairs Alexei chepa. — While about it to speak prematurely, but further aggravating the situation, it can cause this. Itself the American leadership does not see the consequences of these actions, they jeopardize relationships in the world between countries. And it can have very serious consequences.”