Canadian scientists claim that unraveled the mystery of the Voynich manuscript

Is it true that the most mysterious book in the world is a medieval manual for first aid kits in Hebrew? 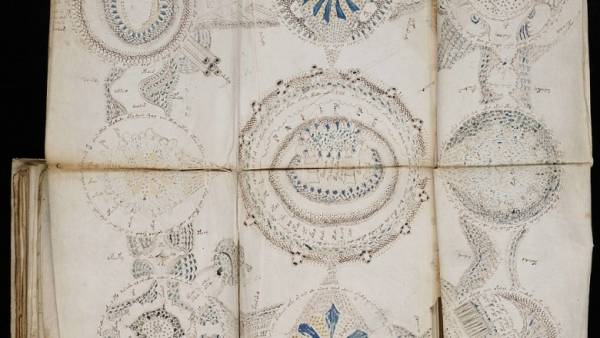 Canadian experts in artificial intelligence say that finally determined the language in which is written a mysterious 600-year-old manuscript that baffled a generation of cryptographers and linguists. What is the Voynich manuscript and whether the computer again was able to do what did not work in humans?

What book is it?

The Voynich manuscript is a medieval document with no cover, the meaning and the purpose of which is so vague that some conspiracy theorists claim that he would have written aliens.

One of the main versions: a manuscript created with the purpose of the drawing and written to a non-existent language. 240 pages of handwritten text it is illustrated with images of plants, including and not similar to known kinds, strange astronomical diagrams and bathing women. The text of the manuscript is written from left to right using about 20-25 “letters” (a few dozen characters meet one to two times) and no visible punctuation.

Traditionally, the manuscript is divided into six sections, devoted respectively to herbs, astronomy, biology (here contains images of women), to cosmology and the pharmaceutical industry — and the sixth section is usually called “stars” because of the drawings of the stars in the fields of very dense text.

The manuscript has received the name under which she became famous, on behalf of Polish rare-book dealer and husband of the writer Ethel Voynich Wilfried, who bought it from the Jesuit library in 1912 and began to look for a specialist who could decipher.

Using the method of radiocarbon Dating that is used to determine the age of fossils and ancient artifacts, the manuscript attributed to the beginning of the XV century. It is now kept in the library Beinecke Yale University, where it in 1969 gave it to another book dealer, Hans Kraus, who could not find the mysterious manuscript to the next buyer.

In 2016, the Spanish publishing Siloe, specializing in the creation of copies of the manuscripts, bought the rights to print 898 exact copies of the Voynich manuscript the price of 7 to 8 thousand euros apiece — with about 300 not yet ready copies already purchased.

Who tried to reveal the secret manuscript?

The Voynich manuscript — without exaggeration, one of the main cryptographic mysteries of mankind. It is believed that to decode it to no avail even tried his first known owners — depending on the source or the Prague alchemist of the first half of the XVII century named George Bares, or a court pharmacist of Emperor Rudolf II Jakub Gorczycki. Manuscript stumped, for example, the British cryptographers of Bletchley Park, who cracked the ciphers of the German Enigma during the Second world war. A popular and very comprehensive book about him, “the Voynich Manuscript: an elegant Enigma” Mary d Imperio, written in 1978, it is now possible to find in open access on the website of the us national security Agency (NSA).

To understand the “Voinitsa” became known as the mysterious language of the manuscript, many scholars tried. One of the first documented assumptions about what may be the Voynich manuscript in 1921 was made a Professor of philosophy William Newbold, who saw in the tracings of the letters a tiny line, who, in his opinion, cursive Greek. Newbold announced that the manuscript in the fourteenth century amounted to scientist and philosopher Roger bacon, and he was devoted to really scientific discoveries like the invention of the microscope. However, existed for this version for a long time: criticism Newbold quickly showed that they found microscopic lines are just cracks in the ink.