The inhabitants of Siberia have ignored Sunday Bulk

Protest blogger Alexei Navalny in the Siberian cities — Barnaul, Yakutsk, Irkutsk, Tomsk, Khabarovsk, Kemerovo, and Novosibirsk — have not collected a large number of people — each of them came to no more than 200 people, reported in the media. 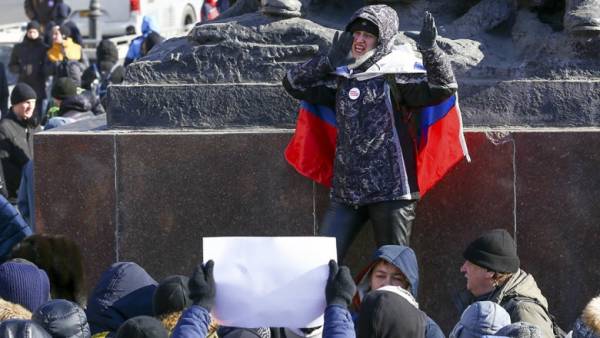 By noon Moscow time the protests took place in Siberian cities — Barnaul, Yakutsk, Irkutsk, Tomsk, Khabarovsk, Kemerovo, and Novosibirsk. In them, according to the interior Ministry was not involved more than 200 people. In Kemerovo the action was not coordinated, in the end, the police detained about 20 people, including the head of Navalny’s campaign staff Ksenya Pakhomov, according to “Vedomosti”.

So, in Barnaul the Chapter of the Ministry of interior reported that a rally in support of Navalny was held on Sunday without violations, collecting a total of about 100-150 people, reports TASS.

In Kurgan, as stated in the city administration, in a campaign which lasted only 20 minutes, was attended by 60 people.