Russia is a “Strike voters»

In Russia on Sunday, 28 January, held a protest against the participation in elections “voters strike”, organized by the politician Alexey Navalny. 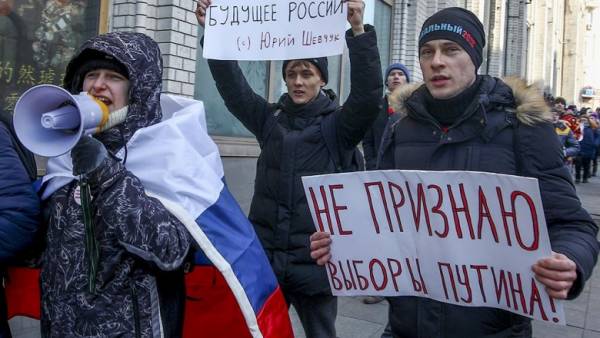 Stocks must pass was said to Bulk, in 118 cities. According to him, the government agreed to rallies in 80% of cases. The first meetings were held in Yuzhno-Sakhalinsk, Khabarovsk, Magadan, Chita, Ulan-Ude and Komsomolsk-on-Amur. In Vladivostok, the action was not coordinated, but people still came out to the rally. According to the photos from the Telegram-channel “Navalny Team”, in events in different cities participate from a few dozen to several hundred people.

In Moscow in the morning the police came to the office of the Fund of struggle against corruption (FBK). Navalny said that the police opened the door to the office of the FBC, his press Secretary, Kira Yarmish said that staff was looking for a laid bomb. The Fund staff early in the morning led online broadcast of the meetings on YouTube. The opposition leader said that he is not detained, and urged people to come to rally in Moscow at 14.00.

In Moscow and St. Petersburg protests is not consistent. In Moscow, Navalny supporters have applied for the rally on Tverskaya street. Moscow city hall has offered to hold a rally in Sokolniki, Marino or at the metro station “Shchukinskaya”. Navalny, however, refused the proposed options and invited supporters to come out in the end. Bulk, as in previous campaigns, has offered to go counterclockwise on Tverskaya. In Saint Petersburg the event will be held on the square of the Proletarian Dictatorship.