In the US nearly 40 children died due to flu outbreak

MOSCOW, January 28 — RIA Novosti. The number of children who died as a result of outbreaks of seasonal influenza, which swept almost all U.S. States, has reached 37, from the data Center for control and prevention of diseases under the government (CDC). 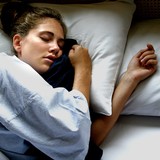 Deep sleep will help not getting the flu

According to him, the flu has spread to 39 States and Puerto Rico. On the island of GUAM in the Pacific ocean reported outbreaks in certain areas, Us virgin Islands in the Caribbean sea recorded only a few cases. The number of hospitalizations with symptoms resembling the flu, was 41.9 per 100 thousand people.

“We expect that we’ll get more reports of deaths of children, just as it happened in other difficult seasons,” — said the representative of the CDC Dan Jernigan, quoted by the newspaper USA Today.

Jernigan believes that the epidemic of 2018, similar to the one that happened three years ago. Then a total of 34 million sick people in the hospital were 710 thousand to 56 thousand, the disease has been fatal. The surprise in the current outbreak was the fact that she consistently maintains its positions throughout the country for three weeks, instead of having to go from one area to another.