“Conciliatory speech”: trump asked Davos to help America to be the first

DAVOS, January 26 — RIA Novosti/Janis Madni, Elena Kudryavtseva. If at the world economic forum in Davos in 2017, the whole world wondered, “Who is mister Trump” — the new President of the United States this year by the end of the forum participants got the answer — he is a businessman who feels among the heads of international companies and corporations in his element and knows how to speak the common language with them. 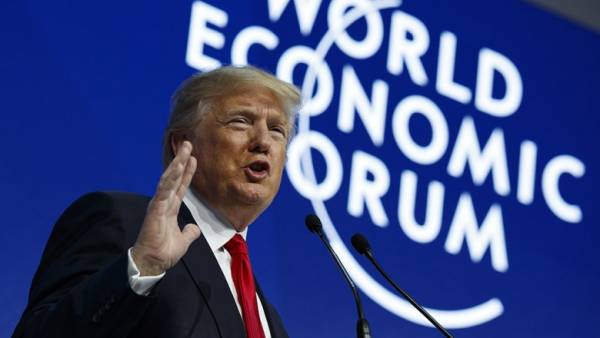 In the early days of the forum of heads of States and business with optimism talked about the beginning of economic growth, new technologies, the development of the oil market, complained to the cyber crime and protectionism.

However, the most anticipated and memorable moments of the WEF became the arrival and speech of Donald trump, with the latter actually became the unofficial closing of the forum,

The theme of Russia was not the top in Davos. “We must honestly admit that today, at the Davos forum Russia is not the top issue not the top issue for discussion. Maybe it is even good. Because the top questions relate to other things. It is questions of globalisation, improvement of living standards, the responsibility of businesses and politicians for the poor, issues of development of the global economy”, — told RIA Novosti about his impressions of the forum businessman Dmitry Pumpyansky.

A second 48-year history of the WEF President’s visit was met not only with “business sharks”. Demonstration in Switzerland against his arrival began even before the forum.

During the event, in the heart of Davos in the first two days a group of 20 people conducted a picket on the main street with placards and slogans. On Wednesday, hundreds of people took to the streets of many Swiss cities, including Zurich, Geneva and Lausanne. The demonstrators expressed their discontent with the immigration policies of the American leader, and also accused trump of racism, sexism and homophobia.

Trump came to the end of the third day of the forum Thursday. By that time, surrounded on two floors of the main pavilion gathered a lot of journalists and participants of the WEF, who wanted to capture the leader of the United States.

The President on arrival waved my hand, made a welcome speech and proceeded to the vip area, where he spent almost five hours. Back to him one after the other through unequal intervals of time have come and then left the Prime Minister of great Britain Theresa may, Prime Minister Benjamin Netanyahu, and founder of the WEF, the Swiss Klaus Schwab.

A day later, trump issued a long-awaited special address to the forum in which to explain to the world what is his famous concept of “America above all” (America first).

As President of the United States I will always put America first, and other leaders must put the interests of their countries in the first place.Donald Trepresent USA

Trump noted that his concept does not mean that the United States will operate alone — the country was open to bilateral negotiations on trade deals with the world, including members of the TRANS-Pacific partnership (TPP).

“It was a conciliatory speech in fact, he wanted to show himself not the enemy of globalization is not the enemy of free trade. Therefore, we, in General, many perceived quite positively,” commented the President’s speech, the head of VTB Andrey Kostin.

However, in his opinion, many have noticed that trump’s words with deeds.

“Many people say: look, trump says one thing and the day before he raised tariffs on a number of imported goods. Therefore, do not differ whether the words with deeds? We’ll see what happens. Speaks well, but in practice the US in recent years follow a very strict protectionist policy,” the banker said in an interview to “Russia 24”.

A separate emphasis in speech, trump was made on the success of the U.S. economy after his inauguration.

At least four times in his speech he said “since I became President.” According to trump, the US economy after years of stagnation, is now on the rise and tax changes led to a positive result, the most striking of which was the decision by Apple to return to the country $ 350 billion from Europe.

“The General impression is that trump really wanted to like it here in Davos, the European business first and foremost. Trump avoided any harsh comments, harsh statements, he basically didn’t offend anyone and nobody was blamed except the terrorists that is in principle understandable,” says Costin.

“Trump was trying to show that speaks to his business with the business. In this respect, perhaps, Trump was easier to talk with this audience than other presidents. Here his native element. He is a businessman and his speech as a businessman and built: let’s (put) the money in America, it is profitable, there they’ll be all right,” said the head of VTB.

To invest in Russia more profitable

The Russian delegation by trump not very impressed. The head of the Ministry Maxim Oreshkin said he believes the potential of the Russian economy is higher than in the us, in this regard, Russia should provide to investors of greater interest than the United States.

It is the business of business is to decide where to invest. But, I think, the Russian economy is of even greater interest because of the possibilities for development of new areas and the potential of the Russian economy are much higher than the American.Maxim Oreshkin an interview with “Kommersant FM»

Competition in the oil and gas markets in the coming years will remain tight and will limit the growth of prices, gifts to Russia can be expected — such is the conclusion part of the speech of the President of the United States.

The Minister of economic development promised to achieve for investors the most comfortable conditions from the point of view of doing business in Russia. To this end, the authorities will provide long-term stability of the real effective exchange rate.

The dollar, on the contrary, touched the nerves of investors in the course of this forum. First, the head of the Ministry of Finance of the USA has frightened businessmen, saying that a weaker dollar will benefit US in terms of trade, then the dollar fell by about 2%. Donald Trump had verbal intervention to save the situation.

And then the question was raised about the threat to the dollar’s status as reserve currency. According to the head RFPI Kirill Dmitriev, this topic appeared on the WEF for the first time, at the initiative of China. “The fact that China has raised this question is very significant because for the first time we hear the words that the use of the dollar as geopolitical weapons can jeopardize the status of the dollar as a reserve currency, which is the basis of system of the United States,” — said Dmitriev.

Words. about the attractiveness of investment in Russia confirmed on Friday the international rating Agency Moody’s, which raised the Outlook of the sovereign rating of the Russian Federation to positive. The Agency noted the decline of the country’s vulnerability to geopolitics and falling oil prices. The latter was achieved largely thanks to a deal OPEC+. The majority of experts agreed on the opinion that this creates a good ground for the return of the Russian Federation in the investment category in the second half.

And on Friday night the Americans still gave Russia a gift, though unpleasant — the U.S. Treasury again expanded its sanctions to include the “black list” of individuals and companies, mainly responsible for the supply of gas turbines in the Crimea.

In all public events of the Russian delegation had to answer two questions: what economic path it will take in the new political cycle, and how sensible potential new and existing US sanctions.

This time in Davos together with Deputy Prime Minister Arkady Dvorkovich has arrived the Minister of energy of the Russian Federation, the Minister of economic development, Minister of communications, head of Vnesheconombank, the Russian direct investment FUND, VTB, Sberbank, ALROSA, RUSAL, Severstal, TMK, NLMK, “Yandex”, “Kaspersky Lab” and others.

Breakfast VTB has opened a series of questions to the Russian officials about the new term of the President and new sanctions. According to Dvorkovich, Russia’s economy has long adapted to the sanctions and to move forward they will not interfere. Paying too much attention to this topic — means to waste time.

He, apparently, was agreed and representatives of the American delegation, which, according to Deputy Prime Minister, avoided meetings with colleagues from Russia. “Russia is not hiding from the dialogue, and Russia is not closed. The Americans are hiding from us in Davos, it’s a small village, but they don’t want to talk. They are hiding from real discussions,” he said. However, the next day the media reported that still met up with the delegation of the United States.

As for life after the presidential elections, the Russian delegates were unanimous in the re-election of Vladimir Putin, Russia will only strengthen its influence in the world. According to Dvorkovich, the economic strategy for the next political cycle will remain the same, but focus on structural reforms.

Breakfast of the savings Bank was dedicated to more futuristic topics — technology and artificial intelligence. The most memorable member of the Breakfast was a robot Sofia, who joked with Gref about the stereotypes in society about robots, and even agreed to ride with him on skis. But to keep a promise she was prevented by Ukrainian delegation, which later brought the robot down the question “What to do with the corruption in Ukraine?”.