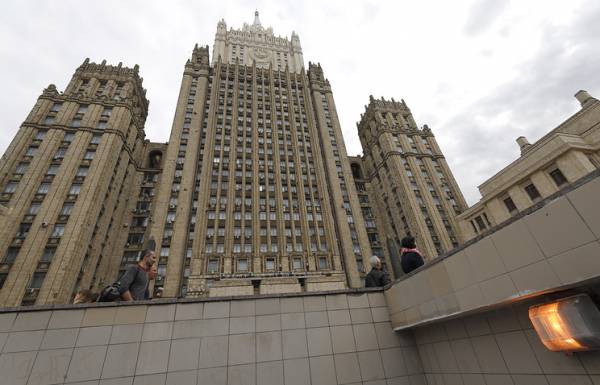 MOSCOW, January 25. /TASS/. US statement on the use of chemical weapons Damascus is aimed at the complication of the Congress of the Syrian acdialog in Sochi. This is stated in the statement of the Russian foreign Ministry published on Wednesday.

“On 23 January, the number of senior US officials made defamatory accusations against the Russian Federation and the Syrian Arab Republic, trying to place the responsibility for incidents involving the conflict in this country of chemical weapons on Moscow and Damascus. In essence, undertaken a massive propaganda attack with the purpose of denigrating Russia on the world stage and undermine efforts for a peaceful settlement in Syria,” the document reads.

“Contrary to common sense we – along with the legitimate authorities of Syria have declared responsible for the chemical attack in Eastern ghouta the Syrian January 22, the fact which is not even confirmed. The only link messages the notorious “White helmets”, a history of collaboration with terrorist groups and completely discredited by constant provocations and spread blatant lies,” said depodesta.

“The ultimate goal is clear – to complicate the carrying out in Sochi of the Congress of the Syrian national dialogue, aimed to support the negotiations under the auspices of the United Nations in Geneva, not to derail the peace process in Syria, because its parameters may not suit the Americans,” the statement reads.

The foreign Ministry called the accusations of hypocrisy by the US in the alleged reluctance of Russia to investigate the facts of use of chemical agents in Syria, saying that Washington interferes with the objective proceedings.