Russia proposes to create a new, Independent UN investigating chemical attacks in Syria (UNIMI). The main difference UNIMI from projects of Joint arrangement (CMP), three times rejected by Russia — to a greater impartiality and objectivity of investigations. However, the U.S. permanent representative to the UN, Nikki Haley was subjected to obstruction of the draft of Russia, even without reading the text of the document. 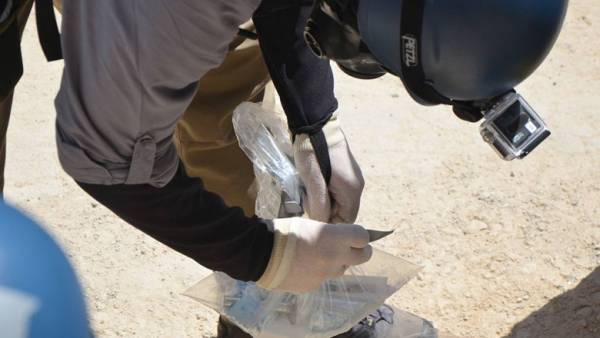 The U.S. permanent representative to the UN, Nikki Haley harshly criticized the Russia-proposed project of an Independent mechanism of the UN (United Nations Independent Mechanism of Investigation. — “Газета.Ru”) for investigation of chemical attacks in Syria, even without knowing its contents.

According to Haley, the American side will not accept any proposals emanating from Russia because they allegedly “undermine the ability of States to establish the truth or politicize the independent and impartial investigation”.

Haley said that the U.S. is ready “right now” to approve the fourth time a Joint investigation mechanism hematic “in its original and impartial mandate.”

The US Ambassador also stressed that Washington “anything less does not appear to be valid”, and the United States together with the international community “will not allow itself to deceive” and unwavering intention to bring to justice the perpetrators of himatakah in Syria. She also did not fail to blame the government of President Bashar al-Assad, and Russia — of “complicity in the atrocities of the regime.”

In response to this statement, Russia’s permanent representative to the UN Vitaly Nebenzia said.

Haley has rejected Moscow’s proposal, even without knowing its essence, rejecting his “threshold”.

“It just gives the truth, which we, unfortunately, know that the US does not need no independent professional mechanism,” — said Nebenzia. According to the Russian Ambassador, Hayley not only gave this step the true state of Affairs, but gave the US “international community”.

Nebesa noticed that if the United States seriously intend to create a professional mechanism of attribution and investigation, then they should not usurp “the role of the judge and the Prosecutor”, placing before any investigation responsibility for himataki in the suburbs of Damascus on the government of Bashar al-Assad.

“At least read the draft resolution, before rejecting it,” — said Nebenzia.

Other participants in the meeting of the UN security Council, unlike the United States, expressed a desire to study the project of Russia, and then already to do conclusions. In support of the consideration of the UNIMI was made by Kazakhstan, China and Bolivia, as well as a number of Western countries — Sweden and France.

The Ambassador of France Francois Delattr expressed General dissatisfaction among the members of the security Council that the discussion of the new structure for the investigation hematic in Syria “reached an impasse”. France accepts the offer of Moscow on the background of this “infinite deadlock”, and would consider the Russian project, said Delattr, noting that in the study UNIMI Paris will come out of French principles.

Sacha, Llorenti, permanent representative of Bolivia to the UN, stressed the need for independent investigation mechanism, but also noted that Russia’s proposal is directed at it. However, the text of the resolution must be agreed, and must “make every possible effort to bring the security Council on this issue,” added Llorente.