Competition “Leaders of Russia” is on the home stretch

In Moscow summed up the interim results conducted by the Academy of civil service at the initiative of the President of the Russian Federation contest of the leaders of the “Leaders of Russia”. In two weeks the finalists will gather for passing final tests in Sochi. As told “Газете.Ru” the curator of the competition Sergei Kiriyenko, the winners will be able sooner or later to take places in the government, but certainly not in the following its composition. 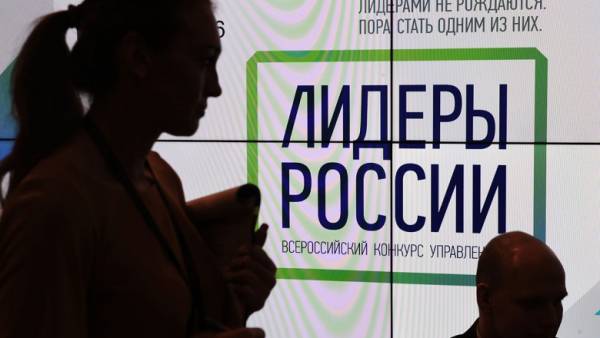 On Tuesday, the first Deputy Chairman of presidential administration Sergey Kirienko has summed up the results of the semifinal stage of the competition “Leaders of Russia” — first he talked about the sociology of competitions, describing the most active strata of the population of the Russian Federation.

The largest number of finalists we have on the densely populated Central Federal district — 24.6 per cent (74 people). Among the regions is to be expected leaders metropolis Moscow (58 people) and Saint Petersburg (30). While on the contrary, against all expectations, civil servants to the finals it’s not much — only 7%.

In the final, scheduled for early February, will compete among themselves for 300 people. A hundred winners will be selected during the on-site competition at the Sochi educational center “Sirius”.

Recall that its Director Elena Shmelev became co-Chairman of the election headquarters of Vladimir Putin.

At the declared by the organizers to statistics, the majority of the leaders of Russia (45%) works in services. However, Kiriyenko was quick to explain that this category is determined, for example, managers in the health sector. The official admitted such a categorization is wrong and promised that in the future the breakdown will be performed more correctly.

More than a third of the finalists were senior managers. Kirienko has noticed that many of them the problem of employment is hardly of concern, as they are so satisfied with the status and salary. “I want to test myself what I’m worth in open competition. And if you can prove that I am the best, maybe my boss will make the corresponding conclusions”, — cited for example, the first Deputy head of the AP typical response on motivation of participants.

Recall that to do this, the organizers have repeatedly stated that the purpose of the project is not so much the employment of specific individuals, and assist in the growth of skills and the formation of personnel reserve for the state.

In the course of communication Kiriyenko said that to pay attention is necessary not just for the semi-finalists, and all participants.

The official also told several life stories of the finalists. So, he, unfortunately, told that one participant was unable to participate in the semi-finals, as the event coincided with his wedding. The party has not compromised and not allowed to participate in the contest in another County (the semi-finals in different regions took place in different dates). The organizers didn’t want to deviate from the rules, although he said that in the future it is necessary to provide for such a situation.