Putin will address with the message before the election

The President may propose to the Federal Assembly in early February. 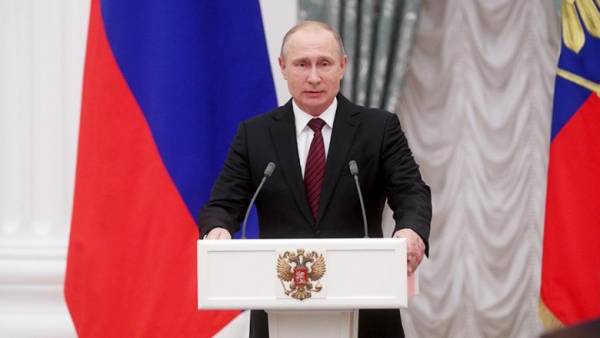 The President of Russia Vladimir Putin will address the Federal Assembly in early February, told “Izvestia” a source close to the presidential administration (AP). Information about what the event will be held until the March election, confirmed to “Izvestia” press-Secretary of Russian leader Dmitry Peskov. The sources of “News” in the state Duma said that as long as you have an approximate date is called 6 Feb. This date is called the most probable one source of “Izvestia”, close to the AP.

According to experts, in 2018, the President will be of a software nature.

— Considering the period in which the message will be announced, there are very high expectations from those measures and approaches which will offer it the head of state. The message, of course, is not quite normal: expect it to be software and it will tell not only about the tasks next year, but also about the strategic development priorities of the country in the medium to long term, — said “Izvestia” head of the Foundation for civil society development (Fargo) Konstantin Kostin.

The analyst stressed that “the officials, politicians and the business community is waiting for a message with a very serious nervous tension”, since the future of the country and each of these groups will largely be determined by this appeal.

The President of Fund “the Petersburg policy” Michael Vinogradov believes that the message will be largely addressed to the management and elites, while voters targeted traditional formats direct line and press conferences.

According to the head of the Department of political science of the Financial University under the government of the Russian Federation Sergey Belokoneva, from the speech of the head of the state awaiting placement guidelines monetary and financial policy, proposals of measures for the development of the banking sector, the specific parameters of the development of the digital economy and indications of a new industry-the drivers.

The message I perceive as a road map for a wide range — both parliamentarians and the Executive, and the government, — told “Izvestia”, first Deputy Chairman of the faction “United Russia”, Adalbi Shhagoshev. For us, deputies, it is a guide on how to improve the legislation.