Moscow. 19 Jan. INTERFAX.RU — the Head of the state Duma Commission on control over reliability of data on incomes and expenses of deputies Natalia Poklonskaya, has developed a bill that proposes two kinds of punishment for MPs and senators who have discovered a conflict of interest. 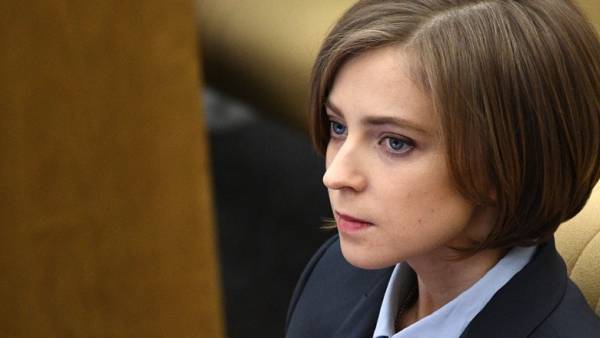 “I can’t publish the text (of the bill) while the fraction (“United Russia”) will not Express my opinion,” said Poklonski reporters on Friday.

At the same time, she said that the bill proposes to introduce two types of liability for the discovery of the facts of the conflict of interests of deputies and senators of either the publication of information about establishing the actions of a Deputy or Senator of a conflict of interest, or the early termination of Deputy powers.

“This gradation depends on the consequences. If the conflict of interest occurred negative effects that (should) make to the plenary session (the state Duma or the Federation Council) the issue of termination of office if the public consequences does not occur, then publish it (information about it), and this in turn affects the image and credibility of the Deputy,” — said Poklonski.

That Poklonskaya has prepared amendments on early withdrawal of mandate for violation of the Deputy’s duties to prevent and resolve conflicts of interest, it announced on December 21, 2017. This initiative is one of the first that was prepared and introduced Poklonskaya. For almost half a year job as an MP she was the author of a number of bills, but in a group of fellow parliamentarians.

And on 9 January, the Chairman of the lower house of Parliament, Vyacheslav Volodin said that in the state Duma established a working group to study issues relating to the conflict of interests of MPs. “We at the Council took the decision to establish a working group comprising the chairmen of the three committees and two commissions: this is Vasily Piskarev, Pavel Krasheninnikov, Olga Savastianova, Natalia Poklonskaya, Otari Arshba,” said Volodin told reporters.

He noted that the working group is to study issues related to conflict of interest, and if necessary, make proposals “for amending the legislation in the field of fight against corruption, regarding decision making with the participation of deputies, whether it is participation in the adoption of laws or appeal to the different structures in the form of parliamentary inquiries”.