Server, application and netprogrammes. As Alexei Kudrin and German Gref offered to reform the government

The center of strategic development presented at the Gaidar forum on the principles of government in 2018. CSR initiatives, allowing you to create “rule of law” at the Federal level, is a “strategic” first Deputy Prime Minister, United personnel service of the White house, the reduction of civil servants by a third, unified digital platform for government and public services, division of state programs on “industry” and “nutsprogramme” — and political competition as the engine of external control officials. 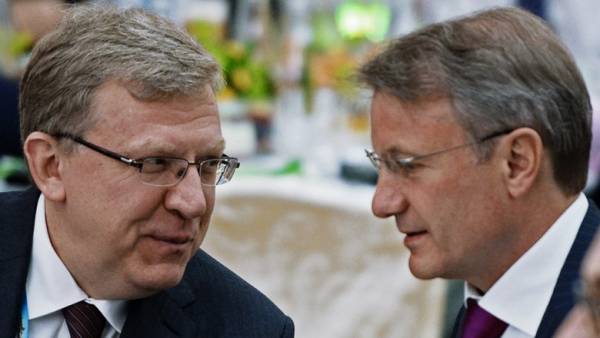 The key report of the day of the panel session of the Gaidar forum in the Russian presidential Academy of national economy and public administration (Ranepa) “the Contemporary challenges of public administration” was supposed to be a presentation by Alexei Kudrin, the “State of citizens”. But the head CSR has been sick, and instead the report was presented by Vice-President CSR and Maria Shklyaruk, the head of Sberbank German Gref (head of the working group of the CSR project). Part of the provisions of the report have already disclosed to CSR, the part is new — in fact, this is the first substantial proposal of the design and ideology of the government after the elections of 2018.

The main priority in the presentation of the CSR is called the principle of “government as platform” is implemented in government reform in the UK in 2010-2015.

Also, as examples of best practices taken administrative reform in Estonia in the years 2002-2016 (ecosystem digital government, X-road), Finland (1989-1995, and 1998-2004) and Malaysia (PEMANDU, 2009-2015). German Gref added a list of reforms of public administration in Singapore (mostly digital gasservice). The basic idea is to combine the construction of the new system of regular management of the state apparatus, the creation of “digital state”, the reform of personnel services and deregulation.

Ideas are harmonized with the main content of “reform package” CSR — from industrial revolution to pension reforms contain a number of innovations in the structure of the budget and planning system.

The idea of a “state of the platform” CSR is described rather generally and, apparently, does not involve the “platform” functionality to the Federal government, allowing the use of power infrastructure for public or private projects. It’s deeply integrated single digital system of public administration — Herman Gref and the head of “project office” the White house Andrei Slepnev stressed that we are not talking about the experience outside of the Russian Federation, — in case of realization of the project Russia, probably, should create the electronic system of public administration is the first in the world. The objectives of the CSR calls are fully accessible by 2024 all rosinformresursa in real-time and “instant” provision of 50 most demanded public services — obviously, the list should include registration of ownership and all certificates and documents.