Alisa Freundlich: “From our film began to disappear a conversation about simple truths”

People’s artist of the USSR — about the dominance of crime on the screen, the diseases of our time, and favorite books. 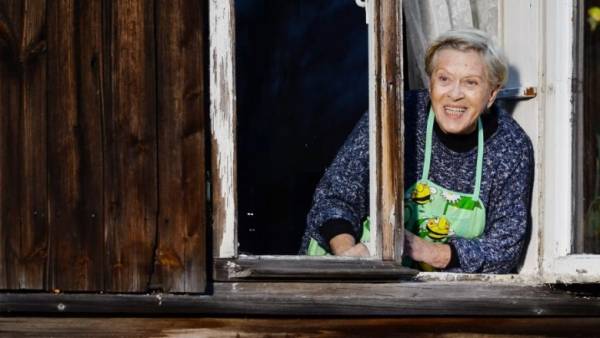 Rent — a dramatic Comedy “Carp crazies”, where a major role was played by Alisa Freundlich. The work was important for the actress to produce the picture came from her grandson Nikita Vladimirov. On the eve of the premiere of Alice Brunovna invited the correspondent of “News” to his home. Apologizing (“I know that it is uneducational, but I’ll smoke”), people’s artist of the USSR started the conversation with praise the young producer, who is modestly sitting next to him.

— I have it all, of course, well done! Started this movie when he didn’t have a single ruble. Mortgaged his flat, borrowed all of our relatives all sorts of stocks and accumulation (laughs). Started the project with great belief that everything must turn out.

And as it turned out.

— Yes, but what difficulties! In October (2016. — “News”) we had very little time to shoot everything on location. Had literally 10 days to grab Dating back the fall. And Marinacci neelovo at that time, was scheduled to premiere in the theater. Then we really asked Galina Borisovna Volchek for us to slightly push back the premiere performances. She knows him from childhood, so reacted to our request, very kind and did everything to give us the opportunity to shoot the material.

We all have time. Part of the movie was filmed in some absolutely pocket money squeezed from their own possibilities. Then after some time Nikita had taken some incredible effort to get more funds and finish the movie.

But neither the film Foundation, nor the Union of cinematographers do not responded.

Considerable labor and victims found a private investor — a person, emerged, so to speak, from oblivion, which gave the financial opportunity to finish the film in February. Can imagine: in October took nature, then at some time I dismissed the whole group and a few months later they got together again and dosnyal pavilion.

— Paradox that in a movie where I play Freundlich, Neyolova, Puskepalis, Mironov, do not give the state money.

I don’t know why this is happening. In giving these money structures of its own system of coordinates, do not want, so to speak, someone to catch the hand. Perhaps, there are also some of his “spring” or its own priority… Nikita’s completely unknown world movie the young man, and the writers of the movie is not very popular (Dmitry Lenihan, Oksana Karas, Andrei Taratukhin. — “News”). And suddenly they wanted the world to produce something (smiles).

As for the cast, Nikita is in the power of his charm, infectiousness, and references to family or a creative friendship was possible even for shooting scenes to persuade the very busy actors. It is a great virtue, human charm, ability to lure and persuade (laughs).

— Do you follow what is going on in contemporary cinema?

— As soon as I find out that the film’s pretty good, I do not mind to sacrifice a little time and go to the cinema. Just go to our St. Petersburg “Aurora” and see. Or, sometimes, a series shown on television and it is a very good buzz, good reviews from people I trust. Then I downloaded it, and I while on vacation or at the cottage be sure to watch. From a total heap I liked “Elimination” and two or three of the series.

To watch the series on TV I can not. I’ll watch one episode and the next, for example, missing work in the theater. The thread of the plot is lost immediately. To watch the series, you have a week or more every night to sit in front of the TV and follow the intricacies of the script.

— Many actors of your generation yearn for the ideals of the Soviet cinema. Saying that the modern cinema lost a lot of quality and warmth. Do you have an opinion on this?