The salaries of teachers have increased with the load. The experts evaluated the kindergarten economy

In the Russian kindergarten teachers less time to devote to individual work with children receive higher than before the salary. Such conclusions were made by experts of the Institute of education, national research UNIVERSITY “Higher school of Economics” in the course of the monitoring the Economics of education in the 2016/17 academic year. This happens against the background of rising kindergarten groups (sometimes up to 40 children) and reducing, in particular, speech therapists and music workers, which “dramatically reduces the overall effect is a huge investment” in early childhood education. In the state Duma said that already preparing amendments for the establishment of the maximum load on caregivers. 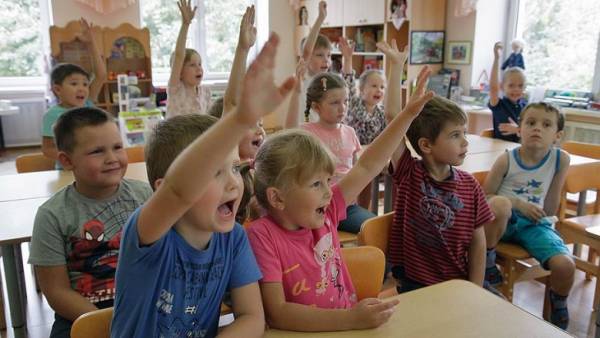 Monthly income of caregivers in 2017 rose 9% in municipal kindergartens and 15% in the private sector. Thus, the salary of a teacher in a state institution is 19 842 rubles., and in private — 21 026 RUB These data were obtained by experts from the Institute of education of national research UNIVERSITY “Higher school of Economics” (HSE) in the course of the monitoring the Economics of education in the 2016/17 academic year (3887 interviewed people from all regions of Russia). The study is carried out since 2002 on behalf of the Ministry of education and science of the Russian Federation.

In General, preschool teachers demonstrated optimism: in 2012, 60% of respondents associated expectations and prospects for the work, now there is 76.2%. To change jobs would like to 15.8%, but really looking for or already found another job only 1.2%.

Scientific Director of the Institute of education HSE Isak Frumin indicates a transformation in the industry, launched in 2013: “pre-school education recognized by education level, introduced the Federal state educational standards (Phosy). Then began the increase of salaries to teachers”.

We will remind, according to the may presidential decree in 2012, in 2013 the average wage of preschool teachers should be equal to the average wage in the sphere of education in the region.

“Unfortunately, the support staff — teacher assistants, unit of nutrition, speech therapists and nurses — whose role in the life of preschool is extremely high, pay is almost never raised. This situation may lead to tension in the team,” — said the Professor of the Institute of education HSE Irina Abankina.

The increase in revenues is due to the increased load on teachers, experts say, which is mentioned by 51% of educators state kindergartens, 26% in the private sector.

In the course of monitoring revealed that children are less likely to put on an evening stroll, especially in winter, often after a day of sleep is one teacher into two groups, unlike the morning hours, when each group work the teacher and the assistant teacher. As previously reported by “Kommersant”, that the may decrees of the President on increasing the availability of preschool education is made, said activists of the “popular front” (onf).

In April 2017 the government reported that the availability of preschool education for children from three to seven years on average across the country was 98,73% and the average occupancy of groups is 25.3 people. However, according to the onf, in 15% of cases in the groups are 30-39 pupils.

“It used to limit the occupancy was 15 people for the younger groups, from age three to 20 people. After exclusion of this option from the Sanitary filling of groups, according to the testimony of educators, reaches 25-26 people, confirms Irina Abankina.— In some regions up to 40 people.”

Thus in the municipal gardens, there is a reduction, in particular, music educators, and speech therapists, according to the HSE. “The financial benefit is just 5% of the total costs of preschool education, says Isak froumin, but it dramatically reduces the overall effect of a huge public investment”.

“According to the requirements Gosov preschool education, the educational organization is obliged to provide for the establishment of child development offers opportunities for positive socialization, personal development, development of initiative and creative abilities through collaboration with adults and peers and age-appropriate activities”, — said “Kommersant” in the press service of the Ministry of education asked to comment on the results of the study.

The Ministry said that, according to Fosam, Russian pre-school education is provided by guiding, teaching, teaching and auxiliary administrative employees. “The Ministry closely applies to all research in this field and certainly familiar with these data”, — concluded the Ministry.

The Chairman of the Committee on education and science of the Russian Federation Lyubov Dukhanina told “Kommersant” together with the onf developed amendments to the legislation that will set a limit load for teachers of preschool institutions.

“The actual increase in wages was due to the increase of the load, often non-core to be performed by support staff. Also Tutors talking about the amazing cases where the stimulating part of the salary accrued for the attendance of children or the timely payment of any services the parents,” she says.

According to her, the amendments establishing maximum workload of teachers will be developed and submitted for public discussion in the next month and a half.