The support rating of the candidate in presidents from Communist party Pavel Grudinina, after rising in late December — early January, began to decline, a politician now shares second place with the candidate from LDPR Vladimir Zhirinovsky, follows from the results of a survey the Russian center for public opinion studies (VTSIOM). 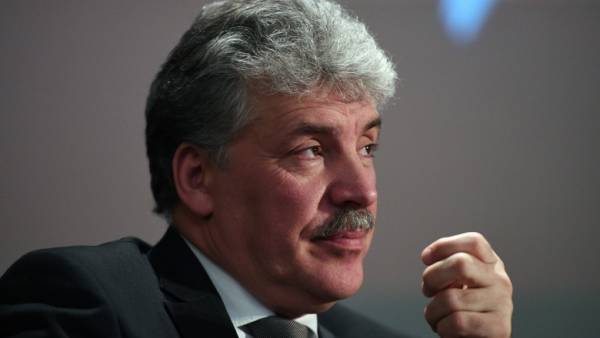 According to 11-15 January, the decision to participate in elections was declared by 70% of respondents. Another 11% of respondents reported a potential willingness to come to the polls. Haven’t decided yet, going to vote or not, 12% of respondents, according to the materials on the website VTSIOM.

To vote for Vladimir Putin in the presidential election ready for 73.2% of Russians. For Pavel Grudinina and Vladimir Zhirinovsky can vote for 6.1% of the total electorate.

Thus, Grudinin passed the position but Zhirinovsky, by contrast, has trimmed its position.

“The unexpected nomination of Pavel Grudinina a presidential candidate from the Communist party led to a surge of attention to him. Grudinin easily assembled historical electorate of the Communists and immediately ahead in the ranking of this pillar of the political scene as Vladimir Zhirinovsky. All this became possible thanks to the wide request for new faces on the left flank, conserved for a long time ago. Played a role and self-presentation Grudinina as a “red Director”, a socially-oriented entrepreneur,” commented the survey results VTSIOM Director General Valery Fedorov.

According to him, the process of growth of a rating Grudinina stopped two weeks after the nomination is about 10-11 January.

“After learning through the media and social networks more about the “Communist billionaire,” the voters have begun to doubt whether he is the figure that you can trust? As a result, the rating Grudinina began to stagnate, and now he is not ahead of Zhirinovsky, and divides with him the second place”, — said Fedorov.

The survey was conducted through telephone interviews among 11-15 January 5 thousand Russians at the age from 18 years. The maximum size of the error with 95% probability does not exceed 1.4%.

In particular, if the presidential election were held next Sunday, the votes for Putin would give 65.9% of respondents. For Grudinina and Zhirinovsky would vote 6.2% and 6% respectively. Another 1.5% would give their preference to Ksenia Sobchak. For other candidates would vote less than 1% of Russians.

While 69% of respondents first heard about Grudinin only in the course of the survey. Another 17% learned about it after the nomination the election, and 14% heard about the entrepreneur before that.

A survey of 1.5 thousand respondents over 18 years old held on 14 January in 100 settlements of 43 regions of Russia. The statistical error does not exceed 3.6%.

On 12 January it was reported that Grudinin shut down all foreign accounts, and the CEC registered him as a candidate for President of Russia. After that, Internet users have been actively discussing the volume of foreign assets of Pavel Grudinina. The businessman later explained the need for foreign accounts.

The political scientist Pavel Danilin, comparing the program Grudinina and past election program of the Communist party leader Gennady Zyuganov, came to the conclusion that they have a lot in common. “There is, however, the only difference from Grudinina and Zyuganov. So, if the last usual much attention was paid to the situation in the world, restraining NATO, the support countrymen, the Director of Lenin state farm completely aluminiowa this section of his program”, — said the analyst.