BEIRUT, 16 Jan — RIA Novosti. Russian actor Marat Basharov on Tuesday during the humanitarian mission of the Russian Federation in the capital of Lebanon signed the official documents in the custody of two Syrian children, five-year and seven-year-old Ahmad ASMA. 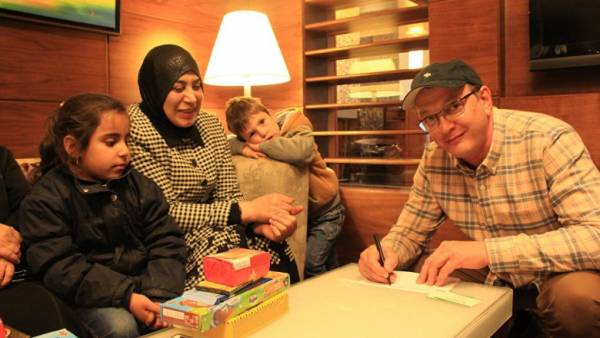 “Children living in temporary refugee camps in the Bekaa valley in Lebanon. Basharov will provide monthly financial assistance to these children”, — told RIA Novosti the head of the Islamic charity Fund “Zakat”, the mufti of Moscow, Ildar Alyautdinov, who also participate in signing of documents.

According to Basharova, custody of Syrian refugee children — it is a personal choice and a religious duty.

The actor invited the children and their mothers mouna Abdel Hamid and Patino Atay to play “conversation with the soul” which will be held in mid-February in Moscow.

“In addition to spelled out with my supporting side, I want to officially invite you to Russia so you can see my Home, my friendly compatriots, wishing the people of Syria a peaceful sky over your head,” said Basharov.News

the Russian Government has simplified the submission of documents for adoption

“This play, where I play an actor and Director, talks about simple truths, our mistakes and opportunities to correct them. If cannot come, then pray for our work. But we are waiting for you in Russia”, — said Basharov.

Muna Abdel Hamid thanked for assistance from the Muslims of Russia. “Your country has supported the Syrians, not in words but in deeds. You came here on a humanitarian mission, and this mission, we, Syrians will never forget”, she said.

As told Alyautdinov, on Tuesday as part of the humanitarian projects of the Council of Muftis of Russia, the Russians visited one of the refugee camps on the border with Syria. “On behalf of the Muslims of our country, on behalf of all the Russians we brought warm clothes to the needy, clothing, gifts for children, diesel fuel,” — said the mufti.