MOSCOW, 17 Dec — RIA Novosti. According to the latest VTSIOM and FOM, the support rating of the candidate in presidents of Russia from party of the Communist party Pavel Grudinina after a period of growth in late December — early January, began to decline. 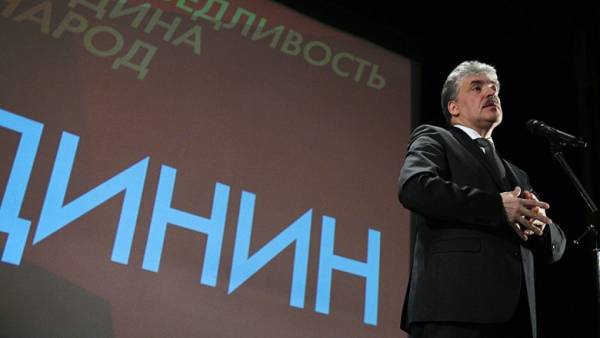 According to the poll, 11-15 January for Grudinina ready to vote 6.1% of the total electorate (the same rating recorded and Vladimir Zhirinovsky). The latest poll FOM records the rating of the candidate from the Communists at the level of 6%.

Experts attribute the drop in support for Grudinina with several factors.

So, Vice-President of the Foundation open new democracy Anna Fedorova notes that weakened the effect of novelty produced by the Communist candidate to the voters.

“Grudinin entered the campaign as a new candidate and as this presidential election, for obvious reasons, of primary interest to the new candidate, a new face is a peak of interest. Because everyone just began to wonder: what kind Grudinin appeared on the political field? I now believe that this effect of novelty was sleeping, as we see by the ratings,” — said in comments to RIA Novosti Fedorov.

In addition, a negative rating Pavel Grudinina influenced history with his foreign accounts.

I think that played a role is information about his wealth and his foreign Bank accounts, because left-wing voters is especially sensitive moment. Vote for Communist-oligarch — is a bit of a strange decision, some contradictory.Anna Fedorovici-President of the Foundation open new democracy

Director of the Institute of the newest States Alexey Martynov noted that illustrative look rating measurements Grudinina among supporters of the Communist party.

“Comrade Zyuganov in the role of chief of staff, the whole Communist nomenclature sharpened by the candidate from the party — all the power of the party is aimed at the candidate Grudinina. However, we see that slightly more than half of supporters of the Communist party are ready today to vote for Grudinina. And this is only the beginning of the campaign, as they say, not all revelations have been” — said Martynov.

Director of the Institute of the newest States expressed the view that the nomination of the Communist party is little known outside the Moscow region candidate may indicate a crisis within the party.

“Many do not understand why the second largest and the oldest party of the country with such traditions, which considers itself the successor of the Communist party, failed to put up a decent candidate. Grudinin, of course, a successful entrepreneur, but regional level. At the level of Moscow region it is quite well-known. Outside the Moscow region, his business is not out, except exported money abroad,” — said Martynov.