On Monday evening in another attempt to organize the evacuation of the sunken fuel truck and crane from the ice tractor fell through the ice. The incident occurred on the Lena river near the village of Kryva Luka in kirenskom district of Irkutsk region. 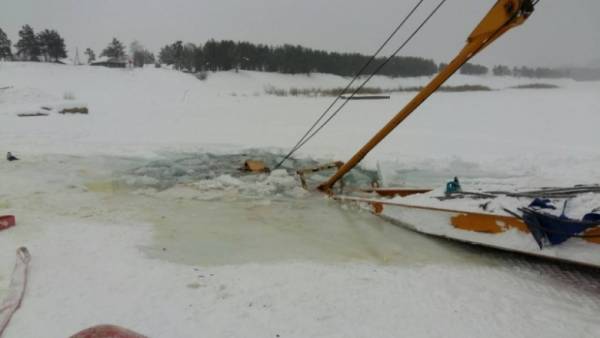 As reported in the press service of the emergencies Ministry, rescuers suggested on Tuesday to pull equipment from the water and place on the shores of the winches, but the locals decided to use 25-ton tractor.

This incident — the second day of the Lena river. The kirenskom area Tuesday morning in the village of Ichera while trying to cross the river fell through the ice tractor DT-75, owned farm. According to preliminary data, the driver couldn’t get out of the cab and drowned.

Upon the death of 31-year-old tractor TFR in the region began pre-investigation check under the article “Violation of requirements of labour safety, entailed on imprudence death of the person” the criminal code.

Earlier it was reported that the evening of 10 January, the truck “Ural” with 20 tons of diesel oil left under the ice when his driver tried to cross the Lena river on an unauthorized ice crossing near the village of Kryva Luka in kirenskom district of Irkutsk region.

The driver was able to escape from the cockpit. The owner of the equipment to the place sent a crane truck “Ural” to pull a truck, however that also fell through the ice and literally stood up on the tank.

With the failure of the car spilled fuel. The area of the oil contamination was 575 sq. m. Rescuers by Monday had collected more than 7 tons of oil products.