PRAGUE, 13 Jan — RIA Novosti. The current head of the Czech Republic Milos Zeman after the preliminary counting of results of voting in 95% of polling stations scored 39.1% of the vote and actually won the first round of the presidential elections, according to Czech TV. 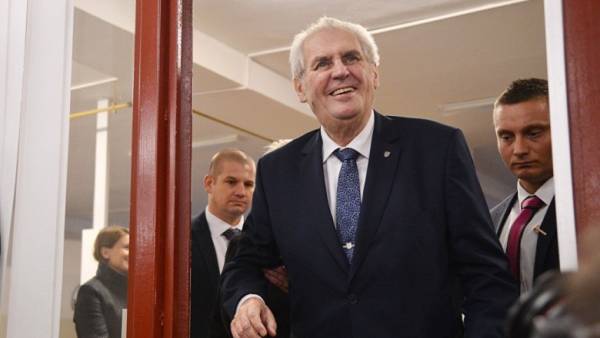 The first round of presidential elections held in Czech Republic on 12 and 13 January.

“In the second round of the presidential elections, in addition to Zeman, came in second place with 26.3% of the ex-President of the Academy of Sciences jiří Dragos”, — stated in the message. The second round will take place on 26-27 January.

In the first round for Zeman, according to preliminary data, voted nearly 1.87 million people, Dragos voted about 1.25 million people.

The incumbent President has won in all 13 regions.

The remaining seven candidates for the Prague Castle received from 0.5% to 10% of the votes, the report said. The turnout was 61.6 per cent. The final official results of the first round of Czech statistical Department expects to report until midnight.