Pavel Grudinin is ready to work not more than two terms

Today the CEC will register a non-party candidate of the Communist party, Director of “Sovkhoz imeni Lenina” Pavel Grudinina. He released a draft of its program “20 steps”, which actually reproduces the program with which the Communist party went to the elections to the state Duma. It aims at the nationalization of industry, power industry, leading banks; a minimum salary of 25-30 thousand rubles for citizens. Is the program and policy abstracts, which were not in the program of the Communist party: to be President can be no more than two terms for life. In 2012, presidential candidate Vladimir Putin began to publish part of its programme on 16 January. While it is not represented. 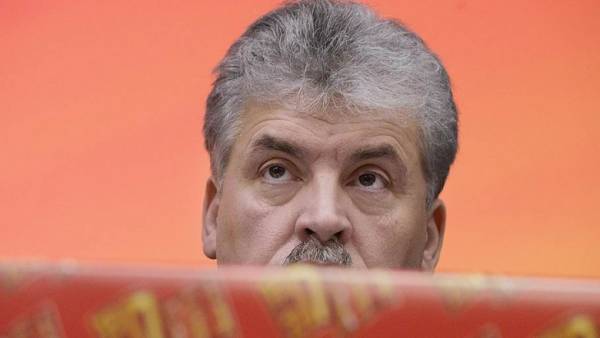 Pavel Grudinin has kept the promise made at the Congress of the Communist party on 23 December, and had based its programme what Communists were for the Duma elections of 2016. Only then the Communist party had “10 steps to a decent life”, and the candidate will be Grudinina “20 steps”. 17 socio-economic, two political and one managerial. The main task, according to the text, — “to deliver the wealth of Russia, its natural, industrial and financial resources for the service of the people”.

For a sharp shift of economic strategy will take a couple of policies.

First of all, the country needs a “fair trial” that will be “on the side of the law, the citizen and the society, not oligarchy.”

Pavel Grudinin promises that the competence of the court the jury will go “all the cases on “extremism” and on the 282-th article of the Criminal code (“inciting hatred or hostility, and humiliation of human dignity” on the grounds of sex, race, nationality.— “Kommersant”)”.

The program States that: “no One will be allowed to be President more than two terms of four years for a lifetime”.

To improve the “quality of government” Pavel Grudinin agree to approve the state Duma not only the Prime Minister but the whole government.

He is ready to become President, which would be “accountable to the people and Parliament.” The competence of the Parliament will be expanded, and the procedure of impeachment is simplified, promises the candidate of the Communist party. Note, the Communists had launched impeachment proceedings in 1998. The draft program is not described the details of what will expanded the powers of the legislative branch.

But it speaks of a new government body, the “Supreme state Council, without the approval of which will not be taken none of the fundamentally important decision of the President.”

How to form this new non-partisan body that is being worked on, told “Kommersant” Deputy Chairman of the KPRF Central Committee Dmitri Novikov.

The reforms under President Grudinin will be a “decent salary”, which will be sufficient to fulfill the “8-hour working day”. The minimum wage in the country with the victory of the President will be 25-30 thousand rubles (the minimum wage since January this year — 9,4 thousand rbl.). The average pension — not below the average wage in the country.

The candidate considers possible “mass construction of housing at cost, mortgage rates are not higher than 3-4%” and favorable conditions for young people. Thus the candidate “guarantees a place for your child in kindergarten and the extended day group in the school.” Plus free education and free medical care, including annual check-up.

To implement social promises will have to change “economic strategy”.

Although success Mr. Grudinin achieved as the market economy, for Russia it considers necessary “nationalization of strategically important and strategic industries, electricity, Railways, communication systems, leading banks”. In this case, “the state will regain a monopoly over the manufacture and wholesale of ethyl alcohol”.

Against this background, Russia should withdraw from the world trade organization, to “restrict foreign speculative capital to the Russian market”, “wild to stop the withdrawal of capital abroad.”

These measures, according to the calculations of the Communists, will give “free money for investment in domestic production”. “Development” Pavel Grudinin promises to “eliminate VAT, to cancel the transport tax”.

The first and only CEC has registered the candidate of LDPR Vladimir Zhirinovsky — he published the program of “great leap forward”.