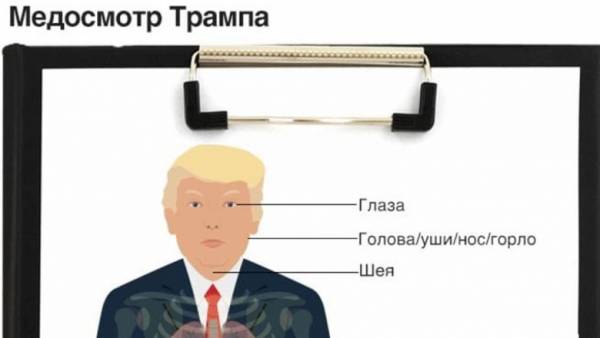 When the President of the United States Donald trump is coming to the medical center Walter reed in Bethesda (Maryland), it will have good and bad “news” for his doctor.

Let’s start with the good

Donald trump does not drink alcohol and, according to him, never drank. He was affected by the story of his older brother Fred, who suffered from alcohol addiction and died at 43.

More good news: Donald trump doesn’t smoke. “I look at people Smoking. And I think it’s terrible,” he said in 2015.

Now for the bad news

In the recently published book the former aides of trump’s Corey Lewandowski and David Bossi “Let trump be trump” (Let Trump Be Trump) says that the food that trump preferred during the presidential campaign, can be divided into four main groups:

The authors say that at dinner trump could eat two big Mac, two servings of Filet-o-fish and drink a chocolate milk shake. It is 2430 calories. The recommended intake for men is 2500 calories per day.

It seems, trump also does not believe in the effectiveness and necessity of physical exercise. Yes, he plays Golf, but to move across the field, the US President uses a Golf cart.

One of the sources claimed that trump believes in the theory that the human organism is a something like a battery with a certain amount of energy, and exercise only Deplete this stock.