According to witnesses, was made at least 10 shots. 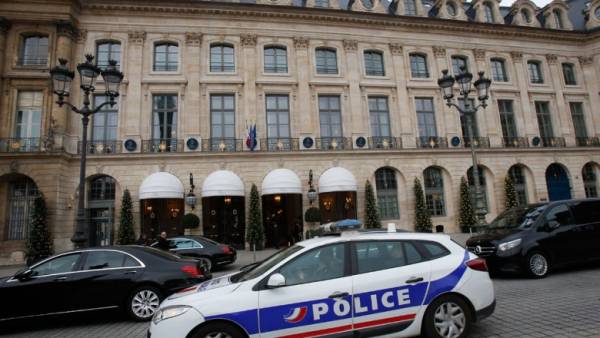 A RAID on a five-star hotel Ritz in Paris, committed in the evening of 10 January. Three men in hoods armed with hatchets and pistols, broke the Windows of boutiques with jewelry and watches and threw the jewels into bags. According to witnesses, was made at least 10 shots. Loot raiders gave to two associates who left the scene by car and moped.

A robber on a moped dropped a bag of jewels. It is already found by the police. Three criminals, who broke Windows, was detained. They hoped to sneak out of the hotel through the emergency exit but it was blocked. The police knocked the robbers with tasers. All three were known to police, but information about their criminal record yet.

The hotel guests were hiding in the kitchen of the popular bar “Hemingway” and in the backrooms. According to preliminary data, anybody from them has not suffered. The bar staff heard the noise and shooting, has asked visitors to lie on the floor. During a RAID at a school were drinking writer Frederic Beigbeder.

The amount stolen is not less than 4.5 million euros. The exact value of the stolen items while not identified.

“Ritz” is one of the most famous hotels in Paris. Five-star hotel offers the luxury of the interiors, and the restaurants and bars it is considered one of the best in the world. “Ritz” is often mentioned in the literature, it is the action of works by Ernest Hemingway, Francis Scott Fitzgerald and other authors. The hotel bar is named Hemingway, because, according to legend, it was he who in 1944 deliberately “liberated” this place from the Germans, having given the soldiers the allies of champagne. During the German occupation of France in “the Ritz” was the command of the Luftwaffe.