The official MIA plundered in the Olympic pace. Arrested led the police reconstruction of sanatoriums in Sochi

As it became known””, were the first defendants in the criminal case on embezzlement of budget funds in the reconstruction for the Olympics in three of the Sochi sanatoria of the Ministry of internal Affairs of Russia. Ex-head of the center of customer-Builder organization’s management of capital construction of the Ministry Igor Dontsov who work, were in jail, and the CEO of subcontractor LLC “of Maritech” Nikolay Marusov, has given his testimony, was placed under house arrest. 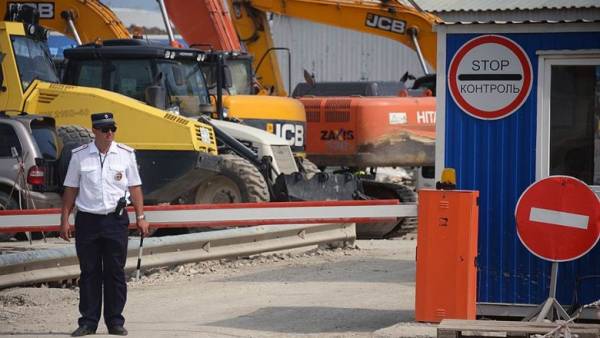 The reconstruction of the sanatoria “Iskra”, “Salut” and “the Host” was conducted from 2011 to 2013, “in accordance with the plans of preparation for the XXII Olympic games 2014”. They later lived police, enforcing the safety of athletes and guests of sporting events. For work headed by Igor Dontsov center as a General contractor was engaged FGUP RSU of the Ministry of interior, responsible to the Department of logistical and medical support for the police Department. The reconstruction was performed in Sochi, OOO “Maritech” which General Director was Nikolay Marusov.

In total, the reconstruction of health centers have been allocated about 500 million rubles. Note that the differences over pay between FGUP RSU of the Ministry of interior and “Maritech” arose almost immediately after. Make each other claims the parties attempted to resolve the dispute through arbitration. For example, the company hoped to recover from the FSUE 120 million rubles, but he was denied.

In criminal proceedings, the plane moved on the basis of internal inspections interior. In 2015, the Department of the investigative Department opened a criminal case under part 4 of article 159 of the criminal code (fraud in especially large size) against unidentified persons. After the investigation had been reported that the theft could be involved and officials of the Ministry of interior, all materials transferred to the TFR.

The first defendants in this case appeared after two years. First was detained the General Director of “Maritech” Nikolay Marusov. According to “Kommersant”, is helping the investigators were able not only to clarify the scheme in which stolen money, but also to enter other participants in the fraud. However, about the possible participation of Igor Dontsov what testified still the same Mr. Marusov, it was possible to make a conclusion just on documentation. From it, in particular, meant that it was Mr. Dontsov, who defended their thesis on “the Development control functions of the customer-Builder in the Ministry of interior of Russia,” signed acts of acceptance of work performed, the prices of which were obviously inflated.

According to some, to lay “extra” money in the amount of 4,75% of the amount of executed subcontractor work could, among other things, due to the fact that the treaties formed by certain types of work.

For example, September 6, 2011, between FGUP RSU of the Ministry of internal Affairs of Russia and the “Maritech” was entered into a subcontract for the construction of transmission sanatorium “Iskra”, and a week later the parties signed a supplementary agreement, under which the subcontractor undertook to perform large-scale construction works on the territory of “Sparks”.

According to “Kommersant”, now the materials of the criminal case we are talking about the embezzlement of tens of millions of rubles.

Businessman Marusov was taken by the Basmanny district court under house arrest, which he did not appeal, and Igor Dontsov at the request of the TFR was sent to jail. Lawyers tried to convince the court that there was no information indicating his involvement in the theft, at the same time noting that the official repeatedly encouraged the interior Ministry “for conscientious performance of official duties”, but the arguments of the investigation was more impressive. The defendant has “substantial cash” has ties to law enforcement and Executive authorities, which can be used to counter the investigation, claimed in the TFR. In addition, the courts took into account that one of the accomplices in the theft is wanted.

In September last year “Maritech”, which were granted several claims of the interior Ministry, was abolished and the Federal state unitary enterprise is now bankrupt.