President Vladimir Putin while visiting his campaign headquarters in Moscow left on the wall inscription “Thanks for trust”. So he thanked the young activists, mostly students. 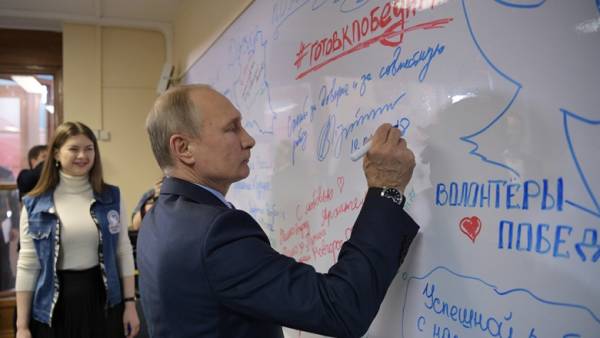 Students during the conversation, Putin asked him to be photographed with them. Before performing that request, the President also left a note on the Board in the headquarters, thanking everyone for their trust. “Thank you for your trust and for working together. President Of Russia Vladimir Putin. 10.01.2018,” wrote the President under the red hashtag “#Gotowkowego”.

As reported by the portal Life.ru in one shift in staff working more than 30 volunteers, including students from Moscow and other Russian cities. Those who came from regions located in hotels.

Previously, the VZGLYAD newspaper reported that at the meeting of the electoral headquarters of Vladimir Putin, said that it was important to inform voters about their readiness for any steps for the benefit of citizens.

According to the head of the Russian state, the work of his campaign in the framework of the election of the President does not have to be formal, otherwise it will become ineffective.

Putin also asked the participants of the election headquarters in the most correct way to work on collecting signatures.

As reported TASS, earlier Putin declared his team will be three co-chairs. On the eve of his press Secretary Dmitry Peskov said that Putin’s campaign headquarters will begin work in the near future.

Recall that the number of registered candidates by the CEC for the post of the President of Russia makes more than 60 people. In particular, on 2 January, the CEC registered representatives Elvira Agurbash, Stanislav Polishchuk and Vladimir Mikhailov.