The fire was suspected addict

Arrested the alleged arsonist of an apartment building in Tyumen. 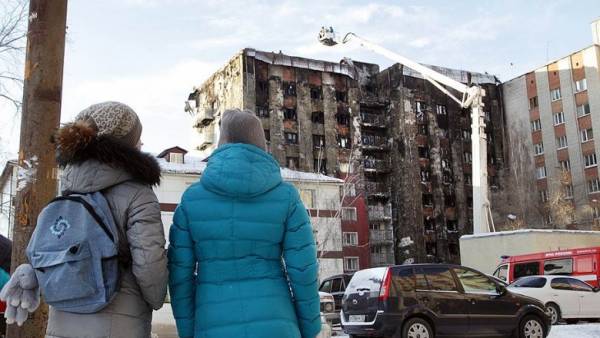 The investigation revealed that the alleged perpetrator of a large fire in an apartment building, injuring 43 apartments, and one resident died. According to preliminary data, the cause of the fire was arson, who made one of the residents of the house gathered to commit suicide. At the moment, is determined by the damage from the fire. The administration of Tyumen has promised to rebuild the house.

On Monday it became known about detention of the alleged perpetrator of the fire in an apartment house along the street Olympic in Tyumen. In the investigative agencies confirm that information, but details of the arrest were not disclosed.

A major fire occurred on the evening of Monday 8 January. The message about the fire apartment building at the remote duty MOE received at 17:41 local time (15:41 MSK). As noted in the regional emergencies Ministry, the time of arrival of the first units in the house № 4 along the street Olympic burned insulation on the side of the building from the first to the seventh floor. Then the fire spread to the roof of the building. Arrived at the scene 110 rescuers and 24 pieces of equipment. Total area of the fire amounted to about 1.5 thousand square meters, suffered 43 of 58 apartments. Rescuers had evacuated 160 people. During the inspection of the affected apartments was found the body of a man, presumably a resident of the apartment No. 70, which assisted in the evacuation of people, but were poisoned by carbon monoxide.

According to the Telegram-channel Mash, during the investigation of the causes of the emergency, the staff of the TFR in the Tyumen region together with field investigators of the Ministry of internal Affairs detained the likely culprit of incident — the inhabitant of the house Alexander Petukhov. At present the detainee is in the TFR, investigators who are investigating a criminal case on the fact of arson (article 167 of the criminal code). According to the record of deeds of Lenin regional court of Tyumen, in 2011, the roosters were sentenced to ten months imprisonment for possession of drugs that are used for personal use.

As a consequence of the verdict, the convict was on the account at the psychiatrist and was repeatedly seen in the abuse of alcohol and use of narcotic substances “in the circle of persons leading an antisocial way of life”.

It is true that the neighbors, according to the court, gave the defendant’s positive characteristics.

As explained “Kommersant” in the administration of Tyumen, at the moment the victim apartment building is recognized as the area of a potential emergency. This status allows you to allocate funds for its restoration. As explained by the head of the press service of the city administration Gulnara Sidorkin, at the moment the exact damage from the fire is not yet known. “Now is determined by the degree of damage to the apartments, the roof of the building. After each of the tenants will determine the issues of recovery,” explained Ms. Sidorkina.