MOSCOW, January 7. /TASS/. Orthodox people of Russia and other countries celebrate Sunday Christmas event, which is 2017 years ago began a new era in the history of mankind. 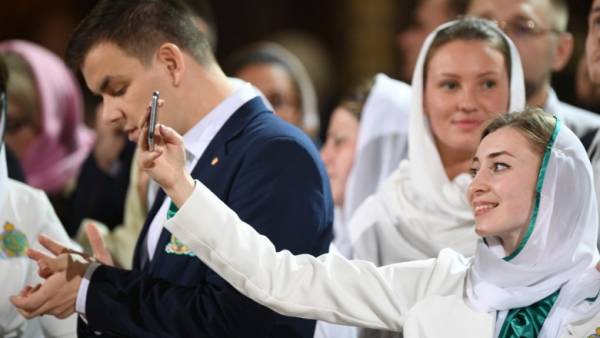 In the Russian Orthodox Church has more than 36 thousand more than 900 temples and monasteries in nearly 70 countries. The Liturgy that night [7 January] morning, and are held in all churches on all continents. According to the Julian calendar Christmas is celebrated, except Russian, and also Serbian, Jerusalem, Georgian, Polish Orthodox churches, Athos monasteries, some Protestants and Catholics of the Eastern rite. A solemn service is held and in the place of the birth of Jesus Christ in Bethlehem.

The Patriarch of Moscow and all Russia Kirill began on the evening of 6 December, the festive divine service at the Moscow Cathedral of Christ the Savior.

“Let each of us today, the victory of alienation and enmity, fear and hostility, and will be able to see your neighbor is not the source of the problem, and the person for whose sake God himself came to earth and let our house once again filled with the joy of Christmas. It will be so much that enough for all who need it. But to bring this joy can only we are not going to forget about it”, — the Patriarch said in his Christmas address.

“In the day of Christmas January 7, Patriarch of a particularly rich program, told the press Secretary of the Patriarch, the priest of Alexander Volkov. Day, the Primate will visit the “Hangar of salvation”, the Church center for homeless on Nikoloyamskaya street. Here he will meet with people who for various reasons were left homeless, give them Christmas presents. Then the Patriarch will greet children at the Patriarch tree in the Christ the Savior Cathedral and will hold a video linkup with the astronauts on the ISS. Immediately after that, he headed the great Vespers at the Cathedral of Christ the Savior.”

To celebrate the coming of the Savior Christians will be 12 days. This period, until the Epiphany on 19 January, called “Holy days” or “Christmas holidays” — the holidays, Christmas carols and the works of mercy.