The program “Time” — 50: how to change the transmission and its people

50 years ago — January 1, 1968, for the first time aired the main news program of the country “Time”, which is a beacon for all modern information and analytical programs. “Газета.Ru” talks about how varied “Time” and its people. 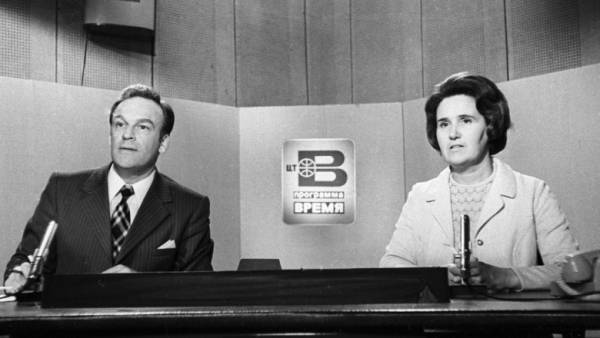 The oldest in the history of Russian TV news program “Vremya” appeared in local television half a century ago. The first issue was published January 1, 1968 under Georgy Sviridov’s music for the film “Time, forward!” on the screen rotates the globe. “Газета.Ru” recalls how it all began and who was at the forefront of journalism in the country.

“January 1, 1968… the closer 9 PM Moscow time, the faster is heating up, my head is spinning. In the Department of manufacture — continuous chime. From Gum prepares direct access to the live Georgy Kuznetsov. Iran Kazakova already on Pushkin square — she needs to talk to the people (gathered darkness!) and scoot — on Shabolovka street… recalled journalist Alla Melik-Pashaeva, who worked in the program from 1967 to 1973.

But the stream in question: at the last moment found thousands of technical problems!

But in some incomprehensible way everything in the story will end well! Iran will have time in the Studio, Hera will hold a story and the first issue will roll like butter, and we, its members, huddle up, coming out of the Studio, as people who happened something very significant…

At first the program was only 3 times a week and without the leading work in the Studio was replaced by live broadcasts of the journalists from the scene.

The usual format appeared only in the early 70s, when edition was headed by the legendary journalist and Creator of the radio “Mayak” Yuri Letunov. The Studio moved in “Ostankino” and the broadcast was in color. Since 1972, the duration Time is 30 minutes.

“It’s hard to imagine now, in the era of the Internet, which was achieved at the cost efficiency.

If it was about an important political event that occurred not in Moscow, the film had to deliver the plane at Vnukovo airport, from there to be rushed to Ostankino, to be dried and only then to see what exactly is removed if there are any marriage, whether it is possible to start the installation. Every two minutes the Flyers, or the duty release called flushing, “Well, the film already finished? Even dries? What are you doing over there! Lit live!”, — said the chief editor of “Time” from 1977 to 1983 Victor Lyubovtsev.

Its name is obliged to transfer the main Director Alex Petrochenko.

“At the end of 1967 gathered in one of the editorial rooms on the street of the four conspirators: Explorer Iran Kazakova, senior editor Levan Zaridze, chief editorial Director of Petrovich (Alex Petrochenko) and the author of these lines.

…Where did the name become a brand? The debate in the group of conspirators was short-lived.

Dozens of options, one worse than the other, flashed as shots, when suddenly Petrovich blurted out: “Time!”.

And everyone thought that this option was spun at themselves in the language!, — recalled the first editor of Leonid Zolotarevsky.

In the post-perestroika 90s the name of the program changed along with the political course.

“And then we name back. You know how happy we were? It’s just… it was an event! After air spree!

We were all very happy that this option was spun at themselves in the language!, — said Alexander Onosovsky, who worked in different years, columnist, senior editor, special correspondent and commentator of “Time”.