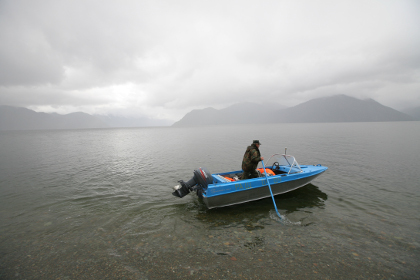 On lake Teletskoye in Republic of Altai rescuers began to find the bodies of the victims of the helicopter crash Robinson. About it “Interfax” on Monday, February 13, said a source in the emergency services.

“Found the body of one of the victims — Elena Rakitskaya. It washed up on shore,” — said the Agency interlocutor.

In addition, as reported by RIA Novosti source in the lake about 1.5 kilometers from the cordon of Cocchi found a piece of, presumably, the wreck of the helicopter.

Information about what in Turochaksky district, the helicopter fell, came from an eyewitness on Sunday, 12 February at 20:20 (16:20 GMT). A group of rescuers from several dozen people were sent to the possible place of falling — promontory Kocchi.

According to the inter-regional public organisation of pilots and citizens-owners of the aircraft, onboard the aircraft was the pilot Dmitry Rakitskaya, Elena Rakitskaya, Anatoly Bannykh, Maria Kozintsev and Gleb Voevodin.

Depth of lake Teletskoye in the place of the alleged fall of the helicopter can reach 280 meters. In this body of water almost does not freeze in winter.

In fact the incident the bodies of the Investigative Committee of Russia opened a criminal case under part three of article 263 of the criminal code “Violation of safety rules of movement and operation of air transport, entailed on imprudence death of two and more persons”.